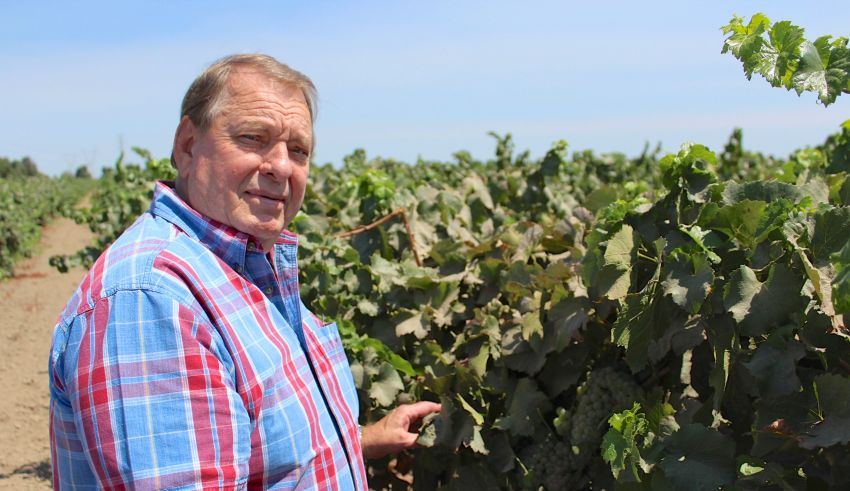 California has led the world in research and innovation in vineyard management practices, and a lot of credit for this goes to UC Davis Extension Plant Pathologist Dr. Walter Douglas Gubler. Known to most as Doug, Gubler has led not only the California grape industry, but also the world in overcoming issues with grapevine pathogens and disease, which costs growers millions of dollars each year.

Gubler would never admit to it, but he has contributed more to the industry than any other researcher in his field of study. Unfortunately after working with the University of California for 40 years (33 in his current position), he has retired as of July 1, 2016.

Reflecting on his career, Gubler never would have thought in his youth that he would spend his career among plant pathologists and growers. In fact, he started out in college as pre-med with the goal to major in zoology and minor in botany. But when he took a plant pathology course, it captivated his interest and took him on a new course to major in botany. He continued on to get his Ph.D. in Plant Pathology at UC Davis in 1982.

Shortly after, he got the job as an extension plant pathologist for UC Davis with an emphasis on fruits such as cherries, apples, pears and berries; however, grapes eventually took over most of his time. Recalling his first project in the field, Gubler shared, “I was asked to meet with the Monterey County Grape Growers Association, and we determined that canopy management for botrytis bunch rot control was a priority concern for the industry. Larry Bettiga came on board around the same time, and we put a project together with an emphasis on increasing spray coverage. At the time, fungicides weren’t providing enough coverage; so we worked on strategies to open up the canopies a bit.”

They found vine leaf removal in proper timing to be a great success. Leaf removal, alone, proved to be more effective than three applications of fungicides for bunch rot control. Leaf removal quickly caught on following this great discovery, and it is still a common practice used today. “We were also able to achieve 30% greater disease control simply by using a leaf blower to remove old blossom debris from the clusters, where disease often begins after mid to late season rainfall or heavy fog,” Gubler explained. “Not many people do that today, but a lot of leaf removal machines currently available, and even hand-leafing, can accomplish the same job in dislodging cluster debris.”

One other benefit to leaf removal is that exposing the fruit early on helps the berries develop a thicker and stronger wax layer, providing extra protection against sunburn and disease. Gubler shared that some growers have gone away from the proper timing of leaf removal. “It has to be done at just the right time to be worthwhile for disease control,” he continued. “The correct timing is right at cluster set when the berries are approximately bb-sized.”

Although his first project, Gubler considers leaf-removal for botrytis control to be one of the greatest finds of his career. It is a great strategy for disease control, and he is so grateful to have been a part of it. “I have always had the feeling that we can do just as much culturally as we can do with chemistry if we understand the pathogen biology and disease epidemiology,” he shared. “Most of my lab work has been focused on identifying the factors that allow us to pinpoint weak areas in pathogen biology or disease epidemiology; and I think that is why we have been successful, because a lot of these programs have been culturally based.” Gubler learned and grew with the California grape industry. When difficulties with vine pathogens arose in the industry, Gubler labored away with his team in the lab and in the field to find better solutions for growers. Powdery mildew was Gubler’s next major project, as fungicides that worked very well to control the fungus in the early 1980s began developing serious resistance issues as time went on.

In 1996, Gubler and his team developed a mildew risk assessment model to help growers and PCAs visualize what the powdery mildew population is doing at any given time. “This model has been used throughout the industry for 20 years now, and it has been a great success,” Gubler stated. “It has always been helpful and accurate through the conservative fashion by which it was designed. Carla Thomas, my technician at the time, was very instrumental in putting the model together.”

Recent surveys show that this model is not only used on about 50% of the acreage in California, but also in Washington, Oregon and many other grape-growing regions of the world including Europe, Chile, Peru, New Zealand and Australia. Growers are using it to determine when and which types of products should be applied, based on disease pressure. Guiding growers and PCAs in this way, this model is saving them on average, about two-three sprays per year and providing excellent control.

Powdery mildew and fungicide resistance continue to be problematic in the industry and are under careful study by researchers; however, fungicides are still effective when used and rotated properly. After an El Niño spring, there is a lot of powdery mildew pressure in vineyards this year. “We saw fairly early disease onset this year in a number of locations,” observed Gubler. “But if the growers are following the powdery mildew index and using the early season control program we put together with the oils, they shouldn’t have any serious issues.”

When Gubler references early season control with oils, he is referring to another research success he came upon when he was asked to test JMS Stylet-Oil for potential virus control in melons in 1992. “The ironic thing is that we found absolutely no virus control, but had great results in mildew control,” he explained. “Then in 1993, I started working on some trials with the oil for mildew control in grapes. It was quite a serendipitous find, but worked great and has developed into a very strong product that is now used all over the Americas for powdery mildew in the early and late season.” Two additional oils, Purespray and Safetyside, have also brought good results.

In recent years, Gubler has been focusing a lot on trunk disease research. Eutypa, Bot, and Esca have been a particularly expensive problem for growers. “Trunk disease is the number two fungal disease problem in the State,” he shared. “California grape growers spend about $260 million a year dealing with trunk disease. We have found about 21 different fungi that can penetrate pruning wounds, so we put together some research in hopes of protecting the vines.”

Gubler noted that back in the late 70s, Bill Moller and Amand Kasimatis showed that benomyl was a good protectant against the pruning wound pathogen Eutypa lata, but had to be applied by hand. The product also only lasted about two weeks, so it had to be reapplied at least three times to be effective, making it a very labor intensive and expensive treatment. They also showed that late pruning gave pretty decent control of Eutypa dieback, but it was never really practiced much because the large-scale growers couldn’t wait that late to prune. To build on that and make it possible for most growers to accomplish, Gubler and Napa County Farm Advisor Ed Weber researched the possibilities of a double pruning system. This involved pruning early in the winter with a rotary saw down to about 5-7 bud positions, and then coming back in late February and pruning them down to two bud positions. This practice resulted in about 95% disease control and was proven economically viable.

In the case of rain following any pruning, Gubler tested a product known as Vitiseal that is highly effective against stopping all 21 of these fungi. “We also are working with another company to bring out another product known as Spurshield for canker disease control,” he said. “Originally, these products were all applied by hand, which made it very uneconomical to do; and the fungicides at the time only lasted two weeks, so they would have to be reapplied several times before the wounds healed. Now we have these pruning wound sealant products registered for tractor application, and we have found that they also now provide dormant season powdery mildew control.”

From leaf removal to sealing pruning wounds, Gubler’s research has had a significant impact on vineyard management in California and throughout the world; however he humbly denies himself of the credit to all this success. He shared, “If there is one thing I can take credit for, it is that my philosophy has always been to surround myself with people that are a lot smarter than me. I’ve done that, and I have had a fantastic group of students and post-docs over the years that have accomplished a lot of great work. It has been a team effort and I owe pretty much all my success to them.”

Gubler also wishes to thank all of the growers in the industry he worked with in accomplishing all that he did. “I’ve enjoyed working with the many progressive growers here, who have been willing to adopt new techniques and cultural practices that have shown to be efficacious,” he stated. “I have a great appreciation for the California grape growers and all of their support over the years; and that has been among the most satisfying parts of my career – working with such great people and witnessing the projects I’ve worked on get put into regular practice in the industry.”

Although Gubler officially retired as of July 1st, there is still a lot of research going on in his lab. He plans on finishing up a few projects with his team through the end of the year. However, a man like Gubler can’t get away from a lifetime of successful research that easily. The department chair has offered Gubler his lab and office for the next year or so, and he plans to stay involved and participate in projects where needed as emeritus faculty. Some of the projects he is still working on deal with: postharvest control programs for brown spot on table grapes, canker disease control, powdery mildew control, and sour rot on grapes. He and his team have made some interesting new discoveries on these subjects, which leads him to say, “I wish was 30 years younger so I could keep investigating these exciting things. The mind certainly is willing, but the flesh is weak. It has been a fantastic 33 years.”

With some extra time in retirement, Gubler has his bucket list of things he would like to do. He plans on writing a personal history for his posterity, leisurely travel the world with his wife, tour national parks throughout the U.S., and spend more time with his family of five children and 19 grandchildren.

From the staff at American Vineyard Magazine, we just want to thank Dr. Gubler for his countless contributions to the grape industry and his friendship. We wish he and his wife well in retirement and their future travels.