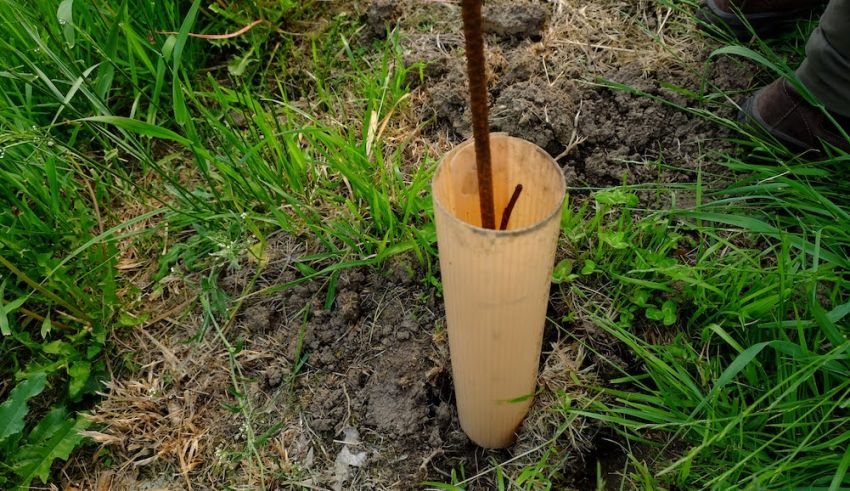 Grow tubes are opaque and colored in order to absorb sunlight and trap heat. Photo: A. Klodd

To appreciate why it’s so important to remove grow tubes in the fall, we first have to understand the original function of grow tubes.

Grow tubes are designed to absorb heat from sunlight, creating a warmer-than-ambient environment inside the tube during daylight hours. Originally called “tree shelters,” grow tubes have been used since around 1979. They originated from a shade tree researcher named Graham Tuley who used them to accelerate the upward growth of young tree seedlings during the growing season (Source).

In vineyards, grow tubes rose in popularity over the last 20 years, but not necessarily for that purpose. For many grape growers, grow tubes primarily function to protect newly planted vines so that we can spray herbicides around the tender shoots without injuring them. They also protect against wildlife and wind desiccation (Source).

But, it’s critical to acknowledge that while we don’t often use grow tubes to increase temperatures, they do still have this impact. This ties directly into why we remove them in the fall.

Grow tubes are designed to absorb sunlight, increasing the daytime temperature inside the tube so that it is above the ambient (natural) temperature outside. During the night, the temperature returns to ambient or near ambient.

This is generally considered okay during the growing season (as long as the temperature does not get hot enough to scorch the leaves) but it is not okay during the winter.

During the winter, the exaggerated daily temperature fluctuations inside the tube are dangerous for the vines, especially if the daytime temperature goes above 32 F. This can cause the trunk to crack, and the warm temperatures trick the vine into de-acclimating to the cold too early. This makes it more susceptible to winter injury and trunk disease.

Once the entire tube is covered by snow, the snow probably insulates it from temperature flux. But with 2.5-3 foot tall tubes, it takes weeks or months for snow to cover the whole tube.

Grow tubes delay the “cold acclimation” process in the fall

Viticulturists and nurseries recommend removing grow tubes as soon as possible in the late summer/early fall rather than waiting until the start of winter. The vines need to experience the natural autumn environment in order to acclimate for winter.

Perennial plants, including grapevines, respond to cooling temperatures in the late summer and fall as a signal to start acclimating for winter. They start to push carbohydrates and nutrients down to the roots, which the vines need the following spring. Simultaneously, the grapevine buds and canes also “harden off,” meaning they turn brown and woody and develop an ability to withstand harsh winter temperatures (Source).

If a young green shoot is inside a grow tube throughout the fall, the temperatures around the shoot remain artificially high and the vine may not have a chance to fully acclimate for winter. It will be more susceptible to winter injury.

For these reasons, viticulturists generally recommend removing grow tubes before the early fall. Some say August, others say September. The main idea is to remove them as soon as they have completed their function and well before the first frost.

Do you need grow tubes at all?

Unless I am assisting an organic grape grower who does not plan to apply herbicides, I typically do recommend grow tubes for new vines in the planting year. This is only to enable safe herbicide application.

Grow tubes enable herbicides to be sprayed around the tender young vines without damaging them. Weed competition drastically slows vine establishment and delays revenue, so managing weeds is economically critical in the first year.

If you are confident in your ability to control weeds without making contact between the herbicides and the newly planted vines, then you might avoid using grow tubes. This can sometimes be achieved by spot-spraying and using a shielded sprayer. However, some herbicides and nozzle types are particularly susceptible to drift, making this genuinely tricky. If you are a first-time farmer without solid herbicide sprayer expertise, I do not recommend risking it.

In terms of promoting vine growth, research by Zabadal and Dittmer (1998) found that there is no season long advantage to grow tubes for that purpose. While the vines in this study grew taller with grow tubes in the first 67 days, they had less leaf area and the same height as non-tubed vines by the end of the season (Source).

One more thing: The Japanese Beetles

It is difficult to impossible to spray for Japanese beetles that get inside of grow tubes. If this becomes a problem in your vineyard, it underscores the importance of removing the grow tubes as soon as they are done serving their function.