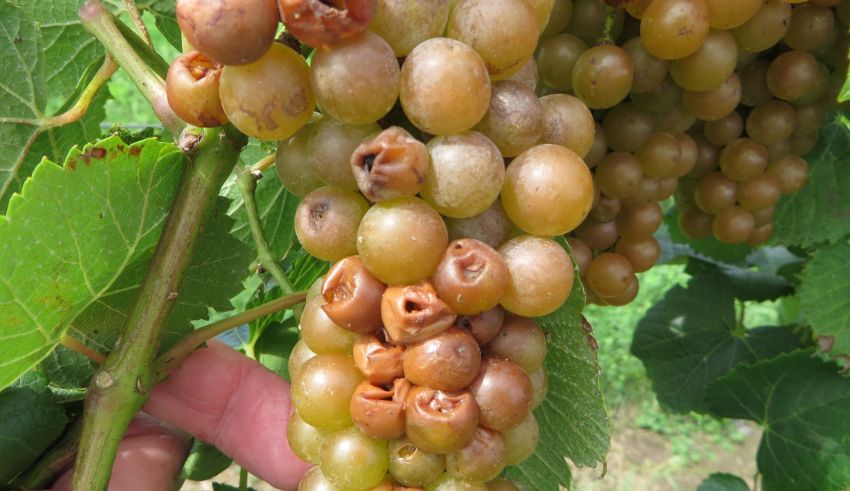 The two diseases discussed below have one thing in common, both Sour rot and Bitter rot can infect grape berries in which the skin has been compromised. That is their only commonality.

Over the past couple of years, the incidence of Bitter rot appears to be increasing at least by visual observation. In many cases, Bitter rot seems to appear in Vignoles and often it is overlooked because in most years the predominant rot in Vignoles is Sour rot. Unlike Sour rot, Bitter rot can infect berries very early in their development.

The causal agent resulting in Bitter rot is Greenaria uvicola. Infection can take place during an extended period during the growing season. Specifically, this period is from bloom to harvest. Infections that occur at bloom results in G. uvicola entering a latent period. In essence, G. uvicola simply rests without causing disease until the grape berry begins to increase soluble solids later in the growing season. Unlike Sour rot, G. uvicola does not require the fruit skin to be damaged or wounded in order to cause infection. However, if the fruit skin is compromised, G. uvicola will infect wounded berries if spores are present.

Infection by G. uvicola is dependent on two environmental factors. Optimum conditions for fruit infections take place when temperatures are between 72-76° F and 6 to 12 hours of wetness. Longer periods of wetness have been shown to decrease infections. These temperature ranges have been readily apparent during the last few days as our morning low temperatures. Couple those temperatures with areas in the state that have experienced evening rainfall/thunderstorms and that is a recipe the bitter rot infection. Figure 1. Norton grapes with Bitter rot in 2015. Notice the red discolored berry which is a classic symptom of Bitter rot in red-berried cultivars and the berry that has fruiting structures (Acervuli) of Bitter rot.

It is not too early to start thinking about Sour rot management. To manage Sour rot, you need to manage the whole complex of organisms involved in the disease. The organisms involved are yeast, acetic acid bacteria and fruit flies. Fruit flies play an essential role in the sour rot complex.

A typical management program of sour rot has been to apply Oxidate tank mixed with an insecticide. Oxidate is surface sterilant with the active ingredient being peroxyacetic acid and hydrogen peroxide. Hydrogen peroxide has activity on bacteria, viruses and fungal organisms. The Oxidate therefore controls the yeast and acetic acid bacteria. The insecticide added to the tank mix controls the fruit flies. The common insecticide put into practice to control the fruit flies has been Mustang Max. Do not overuse Mustang Max as fruit flies in New York State have developed resistance to Mustang Max as well as cross-resistance to a number of other insecticides. Rotate insecticides with different IRAC codes (see page 87 and page 93 of the 2019-2020 Midwest Fruit Pest Management Guide).

The best control of Sour rot is the application of an antimicrobial plus an insecticide starting when the first symptoms appear. This is followed by a second application of an antimicrobial and an insecticide. This recommendation is a change from past recommendations and is based on the research of M.S. graduate student Patrick Kenney. Please take a look at his Symposium presentation entitled “Implicating early fruit fly life stages in sour rot and spray timing applications”. A number of factors have to be considered in the management of Sour rot. Remember that environmental conditions such as rainfall that cause berries to swell and crack as the berries approach harvest maturity will likely result in sour rot. Any conditions that cause the berry skin to crack such as hail, birds, racoons, turkeys, powdery mildew, and grape berry moth larvae will likely result in sour rot. Reducing factors that result in compromised berries will also reduce sour rot. Implementing management practices that maintain berry integrity (bird netting) and speed cluster dry-down (leaf removal) will also reduce the incidence of Sour rot. — By Dean Volenberg, University of Missouri Grape & Wine Institute