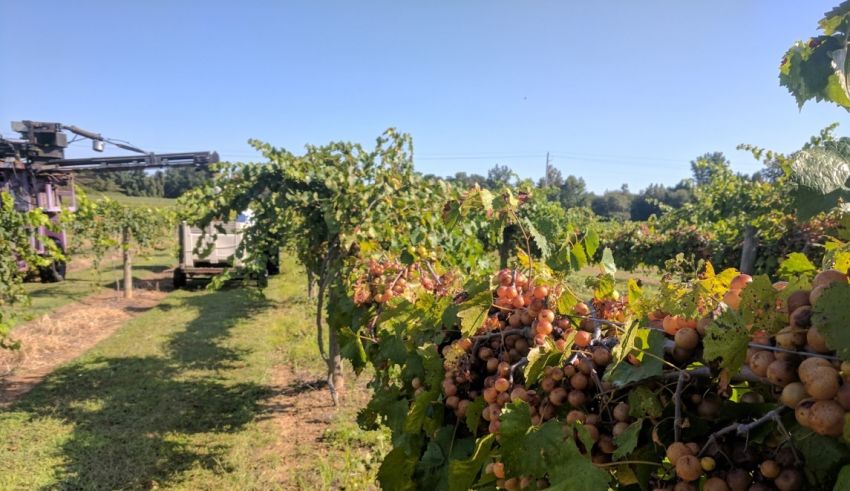 Harvest of ‘Carlos’ in a North Carolina vineyard

Muscadine grapes are native to the southeastern region of the United States. Commercial muscadine plantings in the South can be found in the states of North Carolina, South Carolina, Tennessee, Georgia, Alabama, Arkansas, Louisiana, Mississippi, Texas and Florida. Compared to the cultivation management of bunch grapes that are familiar to most people, muscadines possess a greater tolerance or resistance to a variety of diseases and pests that are prevalent in the hot and humid climate of the South. In addition to the advantageous cultivation in their native soil, muscadines have been evaluated for their benefits on human health for several decades, especially due to their high antioxidant capacity and abundant phenolic content.

It is commonly accepted that antioxidants can slow cell damage caused by free radicals. Antioxidants therefore may prevent some cardiovascular diseases or types of cancers. Plant-based foods are some of the best sources of antioxidants, especially fruits and vegetables. Blueberries and blackberries are considered to be rich sources of antioxidants, where the TEAC (Trolox equivalent antioxidant capacity) value varies from 8.11 to 38.29 M/g FW (an antioxidant capacity measurement). However, in the muscadines, the TEAC values averaged 2.4, 12.8, 281.3, and 236.1 M/g FW for pulps, skins, seeds, and leaves, respectively.

The high antioxidant capacity of muscadine grapes may potentially be beneficial to human health if included in a regular diet. Due to this potential health benefit, the production and sale of muscadine based nutraceuticals products has grown over the past decade to a multi-million dollar industry.  However, questions remain as to whether muscadine-based products can also be used as a medical treatment for cancer or cardiovascular diseases.

Dr. Patricia Gallagher and her team at Wake Forest University School of Medicine have investigated the pharmaceutical potential of a highly concentrated muscadine grape extract (MGE) in cultured cells, in animal models, and in clinical trials for more than five years. She sat down with us, answered questions about her research program, the potential future of muscadines in medicine, and clarified the difference between nutraceuticals and pharmaceuticals.

Pharmaceuticals, more commonly known as medicines or drugs, are products that provide pharmacological activity or other direct effect in the diagnosis, cure, mitigation, treatment, or prevention of disease, or affect the structure or function of the body of man or animals. The efficacy and potential risks of drugs to the human body, the effective, tolerable, and safe dosage of pharmaceuticals is determined by a series of clinical trials. The pharmaceutical development undergoes rigorous scientific and clinical testing prior to marketing to ensure that these products are safe, effective and of good quality and are prescribed and used rationally. The manufacturing process and facilities are carefully regulated by the FDA through a set of guidelines referred to as Current Good Manufacturing Practice (CGMPs) that encompass proper design, monitoring, and precise control. The regulations require that the pharmaceutical manufacturers produce drugs of exacting strength, quality and purity.

“The major advantage to the use of a MGE as a treatment is efficacy for the disease of interest with limited side effects.” – Dr. Patricia Gallagher, Wake Forest University School of Medicine

Advantages and Challenges of research on MGE

Many of the chemotherapeutics in use today have deleterious quality-of-life side effects and can cause tissue damage that may not manifest for years. A plant extract is composed of many bioactive compounds, thus providing multiple mechanisms of action to reduce the disease state. MGE investigated at Wake Forest University School of Medicine contains over 70 distinct polyphenols. The hypothesis of this research is that the overall biological effect is greater with a mixture of components rather than a single compound because more than one cellular signaling pathway will be regulated. The idea is similar to using a drug cocktail comprised of several chemotherapeutics to treat cancer patients.

However, challenges exist in the pharmaceutical investigation of the muscadine grape extract. There is natural variation in the cultivation of muscadines as a horticultural crop. This variation results in significant issues using MGE as a treatment, specifically the lack of quality control and batch-to-batch reproducibility. The quality of raw botanical materials and the exact proportion of bioactive constituents may differ due to uncontrollable factors such as the growth climate of plants and the cultivar used, resulting in variation from batch to batch. It is also essential to remove contaminants such as pesticides, mycotoxins, and heavy metals that are often found in plant extracts.

What is required to develop MGE as a treatment for disease?

To develop MGE as a botanical drug, detailed scientific data on the raw materials and the effect of growing conditions on the biologically effective components would be required, as well as toxicity studies in animals, Phase 1 clinical trials determining toxicity in patients and Phase 2 and 3 clinical trials assessing efficacy in affected individuals.

“It is estimated that the development of a drug costs over a billion dollars and at least a decade of scientific and clinical research.” – Dr. Patricia Gallagher, Wake Forest University School of Medicine

Dr. Gallagher is the co-principal investigator of a research program studying a new proprietary MGE produced by Piedmont Research and Development Corporation. This research is funded by a $20 million private donation and involves over 25 investigators at Wake Forest University School of Medicine, including co-principal investigator Dr. Ann Tallant and the lead oncologists Dr. Heidi Klepin and Dr. Rhonda Bitting. Some of the major research findings are summarized below:

Based on these studies, the research team is currently working to obtain the funding needed to assess these effects in clinical trials.  A randomized, double-blinded, placebo-controlled Phase II clinical trial is ongoing in men treated with androgen-deprivation therapy following prostatectomy.  The primary endpoint is metastasis free survival with a secondary endpoint of improved quality of life.  A second randomized, double-blinded, placebo-controlled Phase II clinical trial was recently funded to assess the effect of MGE on fatigue in older cancer survivors.  No matter what the future brings, the ingestion of muscadine grapes contributes to a healthy diet but may also serve as the basis for biological drugs to treat cardiovascular diseases and certain types of cancer.