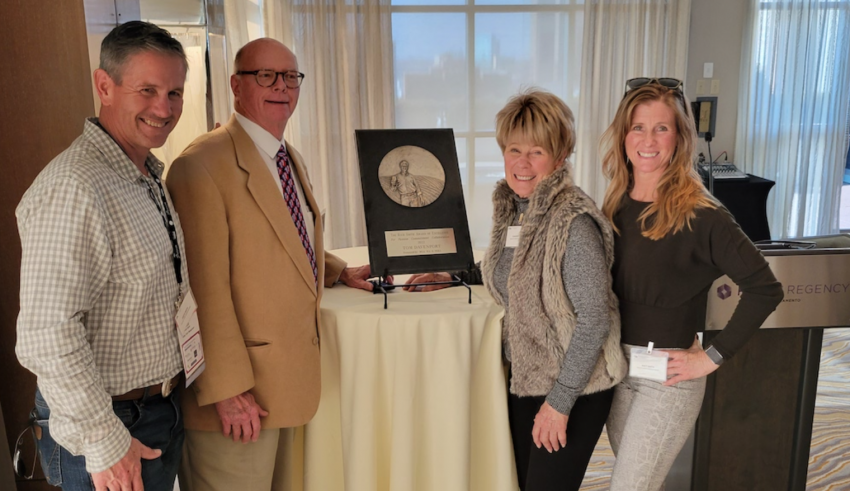 The sixth annual Rich Smith Award of Excellence for outstanding contributions to the American grape and wine industry was presented today to Thomas (Tom) Davenport, a retired executive from National Grape Cooperative who has been a leader in fostering and coordinating research on state and national levels.

The prestigious award annually reflects the spirit and accomplishments of the late Richard (Rich) Smith, founder of Valley Farm Management and Smith Family Wines in California’s Santa Lucia Highlands wine region. Rich was first and foremost a family man, but also a successful grape grower and winery owner, and a highly respected colleague known for the combination of passion, commitment and collaboration which helped advance the American grape and wine industry. 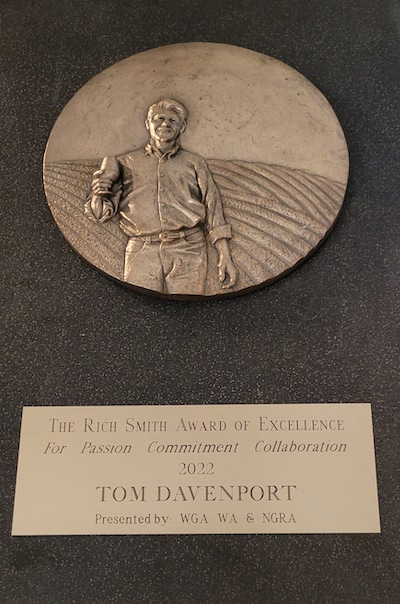 “We are pleased to present this award to Tom Davenport, a close colleague for many years starting with NGRA’s formation,” said Rich’s son Jason Smith on behalf of Rich’s wife Claudia and daughter Kacy. “Not only did the two friends share a passion for research, but they also shared the innate spirit of collaboration which makes things happen.”

Tom joined National Grape Cooperative, which owns Welch’s, in 1966, and spent over four decades there, most recently as Director of Viticulture involved in grape sourcing, production, and viticultural research. He championed partnerships among industry, academia, and government; promoted research and extension efforts in New York, Michigan, and Washington State; and was the driving force behind the Cornell Lake Erie Research and Extension Laboratory which supports the New York and Pennsylvania grape industries through precision viticulture, vineyard mechanization, and optimized nutrient management.

“Tom had a huge positive impact on the New York grape industry, and received the Unity Award of the New York Wine & Grape Foundation in recognition of that,” said Jim Trezise, previous President of NYWGF and now President of WineAmerica, “For decades, he served as the coordinator of research among NYWGF, Cornell, and many industry stakeholders, and showed a unique ability to ‘herd the cats’ and get everyone on the same page. He then took that same dedication and talent to the national level.”

That ability served NGRA very well, as Tom was one of the founding members of the National Grape & Wine Initiative (NGRA’s first name) some 20 years ago. “Tom was an essential part of this organization’s formation,” said NGRA President Donnell Brown. “In fact, it is his signature that appears on many of our core documents, such as our application for nonprofit status. A peer of Rich Smith and previous Rich Smith Award winners Jerry Lohr and John Martini, Tom was the founding member who ensured that the needs of the grape juice industry were represented in our mission.”

Representing the Winegrape Growers of America, Vicky Sharlau added, “Tom’s leadership allowed us the ability to include all grape sectors in our deliberations at the national level. He gently but consistently prodded us to think broadly and boldly–especially as it related to research and truly moving the needle. He was committed to his participation and ensured we all stepped up to the challenge. He led by example.”.

The actual award is a solid bronze, circular depiction of Rich holding a glass of wine in a vineyard mounted on a large wooden back which also includes a metal strip with the words, “Rich Smith Award of Excellence”, plus “Passion, Commitment, Collaboration”, and the name of the recipient.