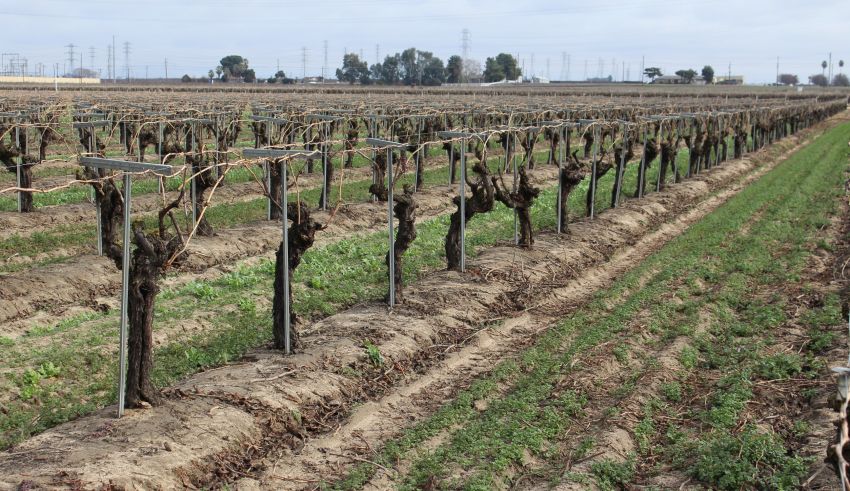 Dormant lime sulfur can be applied right before bud swell. As with any pesticide, be sure you have sound justification for spraying it, understand its limitations of disease control and effects on beneficial insects and the crop, and read the label to apply it safely and appropriately.

Sulfur fungicides are composed mostly of elemental sulfur as the active ingredient. Sulfur can be applied throughout the growing season but is not as effective as conventional fungicides. Some grape varieties can be injured by sulfur (phytotoxicity).

Lime sulfur is just sulfur mixed with calcium hydroxide (calcium polysulfide). It is a contact fungicide and has demonstrated efficacy against powdery mildew. Several formulations are available. However, most formulations are not compatible to tank mix with other pesticide sprays.

Sulforix is also a calcium polysulfide product like Lime Sulfur but has a lower application rate.

Dormant lime sulfur reduces the amount of overwintering fungal spores from anthracnose, phomopsis, black rot, and powdery mildew. However, it is most beneficial for the first three diseases listed and is not very helpful for powdery mildew control.

While it may reduce the amount of overwintering powdery mildew (PM) fungal spores, this does not necessarily translate into increased control of the disease. This is because PM continues producing secondary infections throughout the season, and this is primarily what drives the disease. In other words, killing off some of the overwintered PM spores won’t significantly reduce infection later in the season or have much impact on PM-related yield losses. In-season fungicide application is much better for fighting powdery mildew, by targeting secondary infections. So, pesticide costs would be better spent on in-season sprays for this disease (VEEN, Fall 2012, pp. 2-3).

Dormant vineyards are home to beneficial insects including parasitic wasps and mites, which help keep insect pest populations in check. Additionally, bees are often active in late April or early May when these dormant lime sulfur is typically applied.

Lime sulfur is lethal to a plethora of insects, including beneficials. Some of these species occupy crevices in the grapevine’s bark or may already be flying around foraging for food. If the lime sulfur application is getting into the crevices to kill fungal spores, or contacts the vineyard floor, it is probably also killing some beneficial insects. This underscores why growers must weigh the value of dormant lime sulfur against the unintended consequences, before doing it.

For example: If your vineyard was largely disease-free last year, or you rarely have problems with black rot, phomopsis, or anthracnose, consider whether it is really worth it to spray lime sulfur, given the risks.

Always follow the label on your specific product to determine when and how to spray sulfur products. In general, “dormant” applications must be applied before bud swell.

For example, the Sulforix® label states: “During the DORMANT/DELAYED DORMANT period PRIOR to BUD SWELL apply a single application at 1 to 2 gallons of SULFORIX per 5 acre in sufficient water for thorough coverage.” It gives separate guidance for in-season applications.

According to research at University of Wisconsin, sulfur sensitivity varies among the cold climate hybrid varieties. Recommendations from this research include:

As with all pesticides, read the label for application instructions. There are several lime sulfur and sulfur formulations on the market, each with its own application rate. Therefore, it is not possible for us to recommend an application rate without knowing the exact product and formulation you have purchased.

When reading the label for application rate and tank volume, be sure to distinguish water volumes from product rates, and mix the tank accordingly. Dilute the lime sulfur in the recommended volume of water per acre. Every label should include a water volume range.