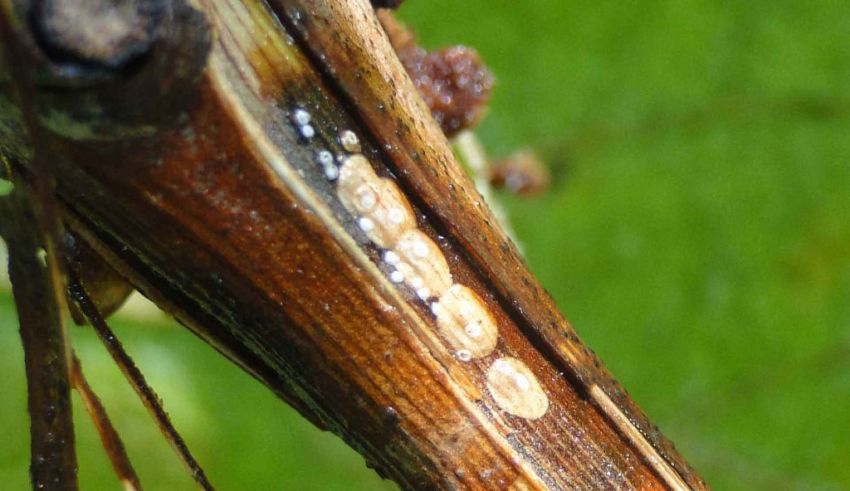 When the crop is in, it is easy to think about putting the sprayer away.  But sometimes there are insect issues that can be addressed in post-harvest, fall or winter periods.  Let’s take up a few now. In general, it is advisable to maintain healthy foliage as long as possible into the fall.  Here are some insect problems that can be addressed to help achieve this goal.

Grape mealybug and some related mealybug species can be found feeding on grapevines during much of the year.  The phloem-feeding insects are covered with white, waxy material that often is produced into finger-like projections along the sides of the body, and into long white filaments from the hind end (all of these disappear if an impressive looking mealybug is dropped into a vial of alcohol!).  Grape mealybug is a pest that can be addressed either early in the year (the recommended timing in our southeastern regional recommendations, https://smallfruits.org/ipm-production-guides/), or in the fall.  Traditionally, mealybugs should be controlled if there were high populations in the fall – honeydew and sooty mold can cover foliage and clusters, and high populations can cause clusters to drop.  The situation has been made worse by the advent of grapevine leafroll virus which is transmitted by mealybugs.  Mealybugs can be targets of natural enemies, but broad-spectrum sprays can induce outbreaks of these insects.  Venom, Assail, Actara (thiamethoxam), Admire Pro (imidacloprid), Belay (clothianidin), Applaud (buprofezin) and Movento (spirotetramat) are good candidates for chemical control of mealybugs.  All but the last two are neonicotinoids.

The question occasionally arises about the utility of oil sprays to grapevines in the dormant period – these have long been used in orchards.  A usual target for oil sprays is European red mite, which overwinters as eggs on the bark of fruit trees and grapevines.  On the relatively smooth bark of apple and peach branches, a coating of oil acts to suffocate the eggs (especially if applied close to hatch, when oxygen needs are greatest).  However, the shaggy bark of grapevine trunks makes it difficult to achieve adequate coverage of the eggs with an oil spray.  Another insect that may be targeted by oil sprays is grapevine scale.  Vines may develop populations of scales especially if broad spectrum sprays have suppressed populations of parasitoids.  On tree fruits, aphids are also the targets of oil sprays since they overwinter as eggs on the bark.  But the main aphid on grape uses black haw as its winter host, so aphid management in vineyards does not benefit from oil sprays.

General examination of vines. Vines may be examined in the post-harvest period for symptoms of Pierce’s disease, including typical leaf discoloration and the presence of matchstick petioles.  Unusual pest situations may also be revealed, such as lecanium scales.  European fruit lecanium and terrapin scape could occur on grapevines but this is not common. —By Douglas G. Pfeiffer, Department of Entomology, Virginia Tech