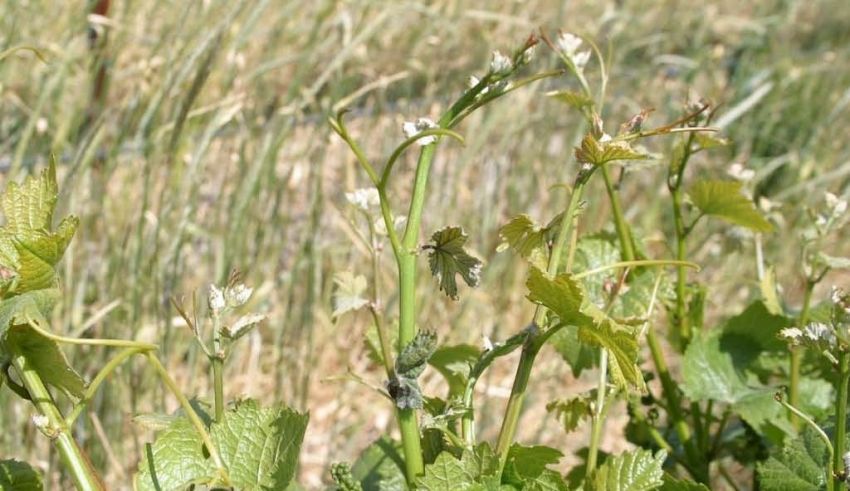 Pinot leaf curl (PLC) is a physiological disorder of wine grapes marked by characteristic foliar symptoms early in the season. It may be associated with a disruption of healthy nitrogen metabolism in developing shoots. Although its incidence tends to be episodic, PLC symptoms were reported in Southern Oregon in Spring 2019 and have resurfaced (to a lesser degree) in Spring 2020. Due to its association with extended periods of low temperatures from early shoot elongation through bloom, PLC symptoms may be prevalent across the state. PLC symptoms are most severe in the Pinot-family cultivars (e.g., Pinot noir, Pinot blanc, Pinot gris, and Pinot Meunier), though symptoms have been documented in Syrah, Chardonnay, and Cabernet Sauvignon as well.

Symptoms of PLC occur in rapidly expanding tissues (e.g., shoot tips and unfolding leaves) and may vary in intensity with the timing and length of early-season low temperatures. Curling of leaf blades is considered a mild symptom and can be confirmed by the presence of a necrotic region in the central vein on the underside of the leaf, beyond which the blade will curl back towards the shoot (Figure 1). More severe symptoms will include stunting of shoots, partial shoot dieback, petiolar necrosis, leaf necrosis, leaf abscission, cluster loss, and “orphaned clusters” (when shoot tip abscises just above an unaffected cluster; Figure 2). These symptoms seem to be exacerbated by earlier and persistent periods of low temperatures, though symptom expression may vary widely across clones, cultivars, vineyards, and growth stages. For example, symptoms can also be found on growing shoot tips much later in the season (Figure 3).

PLC and similar disorders (e.g., false potassium deficiency AKA “Spring Fever”) have been connected to elevated levels of putrescine, a polyamine derived from remobilized nitrogenous compounds in the roots that are associated with cell and tissue death in plants. Arginine is one such source of remobilized nitrogen, which is converted into glutamine for use in early season growth. However, stress conditions like persistent low temperatures may instead induce enzymatic conversion of arginine into putrescine.

PLC has been mistaken for Botrytis shoot blight, but Botrytis cinerea fungus is promoted by warm moist weather, whereas PLC is associated with early-season cool temperatures. Botrytis primarily infects dead tissues and may occur at the site of leaf necrosis associated with PLC, but it does not cause necrosis. Thus, the application of fungicides registered for Botrytis will not reduce the incidence or severity of PLC. Additionally, PLC is unrelated to Grapevine Leafroll Disease, a viral disease that may cause rolling of leaf margins later in the season.

To date, there is no recommendation for managing PLC symptoms. While researchers continue investigating PLC, growers are encouraged to monitor the incidence and severity of PLC symptoms in their vineyards. This may include symptom descriptions, symptom severity, photos, documentation of the date and duration of observed symptoms, associated cultivar and vineyard location information, as well as climatic information (e.g., temperature, growing degree days, precipitation) for the period of symptom expression. Delaying shoot thinning may allow damaged shoots to recover and aid the selection of shoots to retain. Affected shoots that lose leaves distal to clusters will likely prompt later emergence of lateral shoots at the nodes of the abscised leaves. For severe cases of PLC, ambiguous symptomology, or concerns related to PLC in Oregon, please contact Oregon State University Viticulture Extension. — By Cody Copp, Graduate Research Assistant, Dept. of Horticulture, OSU; and Dr. Alec Levin, Assistant Professor and Viticulturist, Dept. of Horticulture, OSU-Southern Oregon Research and Extension Center (SOREC)