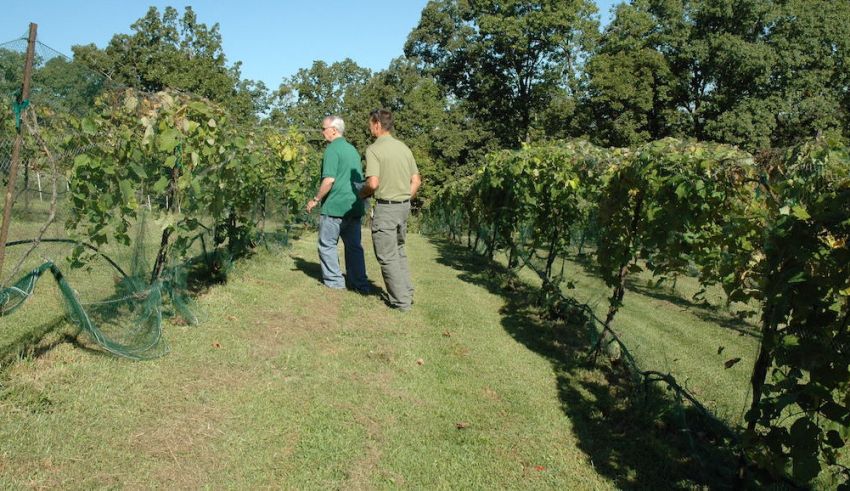 Some plant diseases are sporadic and only flare–up when environmental conditions or host plant health is in decline. In comparison, some diseases appear every growing season such as downy mildew or Phomopsis cane and leaf spot. The former are endophytes and can be either bacterial or fungal and live within plants for a portion of time without causing plant disease. Neopestalotiopsis and Pestalotiopsis are endophytes. Since 2015, I have been evaluating both Neopestalotiopsis and Pestalotiopsis found in Missouri grapevines. I was introduced to these fungal organisms rather abruptly when disease symptoms were recognized in a Norton vineyard near Owensville, MO in June 2015 (Figure 1).

Pestalotiopsis in Missouri was first described as a grapevine trunk disease (GTD) in 2012. (Urbez–Torres, J. R. et al. 2012). This research surveyed symptomatic grapevines for GTD. A single species of Pestalotiopsis uvicola was described as well as Pestalotiopsis species that could not be identified to species level. The survey confirmed that Pestalotiopsis is ubiquitous as it was the second most prominent causal agent only second to Botryosphaeria canker. This survey research provided Missouri grape growers the first information on the prevalence GTD in symptomatic interspecific hybrid grape cultivars.

In June 2015, a grape grower near Owensville, MO reported disease symptomology on berries that resembled Black rot (Figure 1). Follow up research determined the causal agent as Pestalotiopsis spp. Pestalotiopsis has unique conidia that are segmented with the three medium cells concolorous (same color) (Figure 2). The apical and basal cells are void of color and often have appendages which can help provide an identification. Disease symptoms were restricted to berries. Interestingly the disease appeared on Norton clusters when the juice brix from the berries was at 4 brix. An application of Pristine resulted in symptomology fading and further infections were not apparent. Follow up research of sequence data from the ITS–rDNA compared to GenBank sequences identified two species P. microspora and P. sydowiana.

Further research on GTD in Missouri also demonstrates the prevalence of Pestolotiopsis in Missouri vineyards (Serra 2020). In 2019, dormant cane samples were taken from select cultivars that were part of the NE–1020 cultivar evaluation block located at the Horticulture and Agro-forestry Research Center, New Franklin, MO. Samples were visually evaluated for signs of GTD and none were noted. Small (1–cm) cane samples were surface sterilized and plated on PDA. DNA was extracted from pure fungal cultures and PCR performed on the DNA amplifying noncoding regions of rRNA genes. Gene sequences were then compared to published sequences to determine the fungal specimen to species level. Chardonel, Prophecy and Traminette cane wood had P. uvicola or P.microspora.

In November of 2020, 54 samples of trunk wood were collected from a Crimson Cabernet vineyard near New Haven, MO. The vine age was 8 and 9 years old. Six samples were taken per vineyard row from 10 rows. The first vine sampled was vine six in the row and five vines were skipped between samples. If a vine was missing a sample was not taken. A sample consisted of a 6–inch long trunk section taken 4 to 5–inches above the soil level. Samples were kept on ice and transported to the laboratory at the University of Missouri. Thin 1 to 2 cm section was removed from each sample. These samples were surface sterilized and rinsed prior to plating on PDA. Similar to above, colonies were transferred to PDA plates to isolate single fungal isolates. DNA was extracted from pure fungal cultures and PCR performed on the DNA amplifying noncoding regions of rRNA genes. Gene sequences were then compared to published sequences to determine the fungal specimen to species level. Observations within the vineyard where these fungal isolates were collected suggested that potential resistance to mancozeb may have occurred. Initially it was thought that Phomopsis viticola may have developed resistance to mancozeb containing products. However, as described above no Phomopsis viticola was isolated from the leaf samples, only Pestalotiopsis and Neopestalotiopsis. An in vitro assay demonstrated that fungal isolate C3 and C7 were susceptible to 1/10 the field application rate of manzate pro stick (Figure 4). Leaf blight from Pestalotiopsis is the most frequent symptom observed in Missouri vineyards. It is very common to observe symptoms in Chambourcin leaves from early to late May. A small area on leaves infected with Pestalotiopsis have a very distinct red coloration. This red blighting can appear on the leaf margin or the base of the leaf near the leaf petiole junction (Figure 5). The red coloration is ephemeral and as temperatures increase the red coloration eventually disappears. In my experience, I have only observed leaf blighting from Pestalotiopsis to cause leaf drop one time. This occurred in a Chambourcin vineyard near Cuba, MO that was not sprayed with a fungicide until the shoots were approximately 18 to 24–inches. An application of mancozeb at that time resulted in the vines recovering. Fruit rot resulting from Pestalotiopsis was first documented in a Norton vineyard located near Owensville, MO. Initial observations of symptomology in the vineyard appear in some respect to Black rot (Figure 1). In advanced stages, the infected berries dry–up and appear mummy–like similar to Black rot mummy berries. Moist incubation of symptomatic berries results in the appearance of acervuli on the berry surface (Figure 6). Within the acervuli are the very distinctive conidia of Pestalotiopsis. Initial research focused on in–vitro studies that evaluated two fungicides. This early research determined that mancozeb and pyroclostrobin (One of the active ingredients in Pristine) were efficacious at 1/100 the field rate to Pestalotiopsis. My laboratories current replicated research using an in–vivo detached berry assay demonstrated that Pristine, Manzate Pro Stick and Captan at the field rate were efficacious in preventing infection from Pestalotiopsis.

Pestalotiopsis and Neopestalotiopsis are endophytes that often live mutualistically within or on the grapevine. These fungal organisms at some point in their life cycle can become pathogens. My current research is assessing the efficacy of select fungicides to limit Pestalotiopsis from colonizing pruning wounds. Pestalotiopsis can be considered a “weak” pathogen and needs a wound or entry point to cause infection. Greenhouse experiments are evaluating the efficacy of Rhyme (soil drench), Rhyme (topical), Topsin M (topical), Sonoma (topical) and Pristine (topical) on a fresh pruning cuts of Chambourcin. Rhyme is a systemic fungicide (xylem mobile) that is currently not labelled for use in Missouri but has shown good activity in controlling some GTD when applied via drip irrigation. Sonoma and Topsin M are being evaluated because of the current label provides application on pruning wounds during dormant pruning. Pristine was selected because it has demonstrated efficacy in vitro as well as in the in vivo detached berry assay. For each fungicide treatment, freshly cut stumps of 1–year potted Chambourcin grapevines were sprayed with the field application rate until runoff. Except the grapevines for the Rhyme soil–drench treatments that were treated three consecutive times according to the label. A total of 10 grapevines were treated per fungicide. Another five grapevine stumps were sprayed with water. After the fungicide and water had dried, five of the treated fungicide stumps and the five vine stumps treated with water each received five 20 μL droplets of 1 X 106 Pestalotiopsis conidia L. Treatments were applied on March 15, 2022 and evaluations of the treatments at this time have not been evaluated. Please stay tuned.

Eyre, B. and D.S. Volenberg. 2022. The efficacy of selected fungicides for the protection of wine grapes in Missouri. Undergraduate Research Day, Jefferson City, MO, April 11.