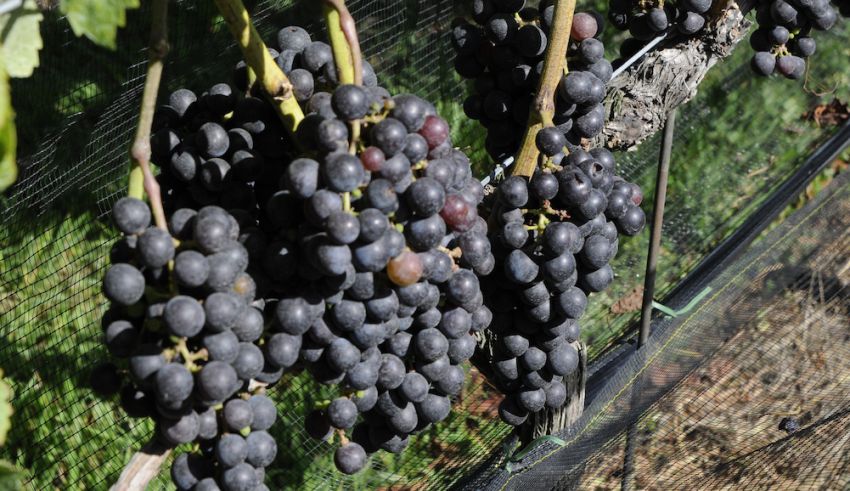 Cornell University — From 9/7 to our sample date of 9/13, maximum daily temperatures at Geneva ranged between 78-81 °F, with nighttime lows in the low to mid 50s. Two rainy days (9/8 and 9/9) dropped 0.8 in of rain. The rest of the week was overcast to sunny. In other words, it was mostly good ripening weather.

Hybrids. Early-season hybrids (Seyval blanc, Cayuga white) and the rot-prone variety Vignoles have been harvested. Overall the standard hybrids saw soluble solids increase by 1.3 to 2.4 °Brix, while TAs dropped by 0.4-1.6 g/l. Compared to last year, brix are 0.3 to 3.2° lower than last year at this time. Berry weights are 0.16 (St Croix) to 0.5 g/berry (Cayuga white) heavier (and larger) than last year.

Vinifera. The Long Island Sauvignon blanc block was the first of our sample vineyards to be harvested. Brix gains among the vinifera were consistent, ranging from +1.2 °Brix (Chardonnay) to +1.6°Brix (Gruner veltliner). At 16.5 to 19.8 °Brix, sugars are lagging behind last years range (17.5 to 21.2 °Brix). Titratable acidity is running 1-2.5 g/l higher than last year at this time. Berry weights are consistently higher (most in the 0.1 to 0.25 g/berry range.

The most consistent story this year is that berries are bigger. For a vineyard with 9×6 spacing and 807 vines per acre, all other things (cluster number, berry number) being equal, each 0.1 gram of additional berry weight translates to 0.25 T/acre higher yield. Note that for Concord (+0.4 g/berry) and Niagara (+0.8 g/berry) this translates to 1 to 2 T/acre additional yield. The larger berries resulting from mid-season to post-veraison rains, may also be diluting concentration of sugars in the berries. 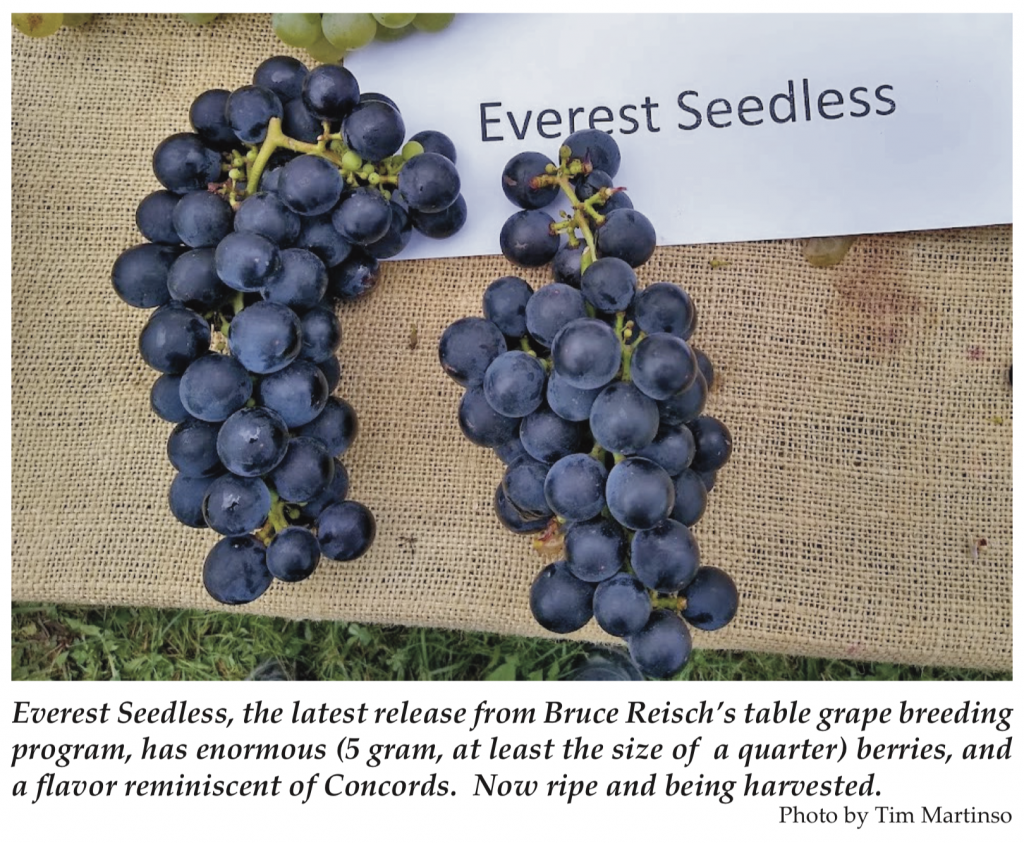 Harvest is slowly proceeding on Long Island with some early blocks of Pinot Gris and Sauvignon Blanc. Some were picked due to a dire forecast of two days of rain Sept. 16-17. While the temperatures cooled off, the rain dissipated before making it to the East End. The front that moved through is supposed to clear out the persistent haze that has been in place this week. The haze, a consequence of the west coast fires, has been present intermittently throughout the latter half of the season. 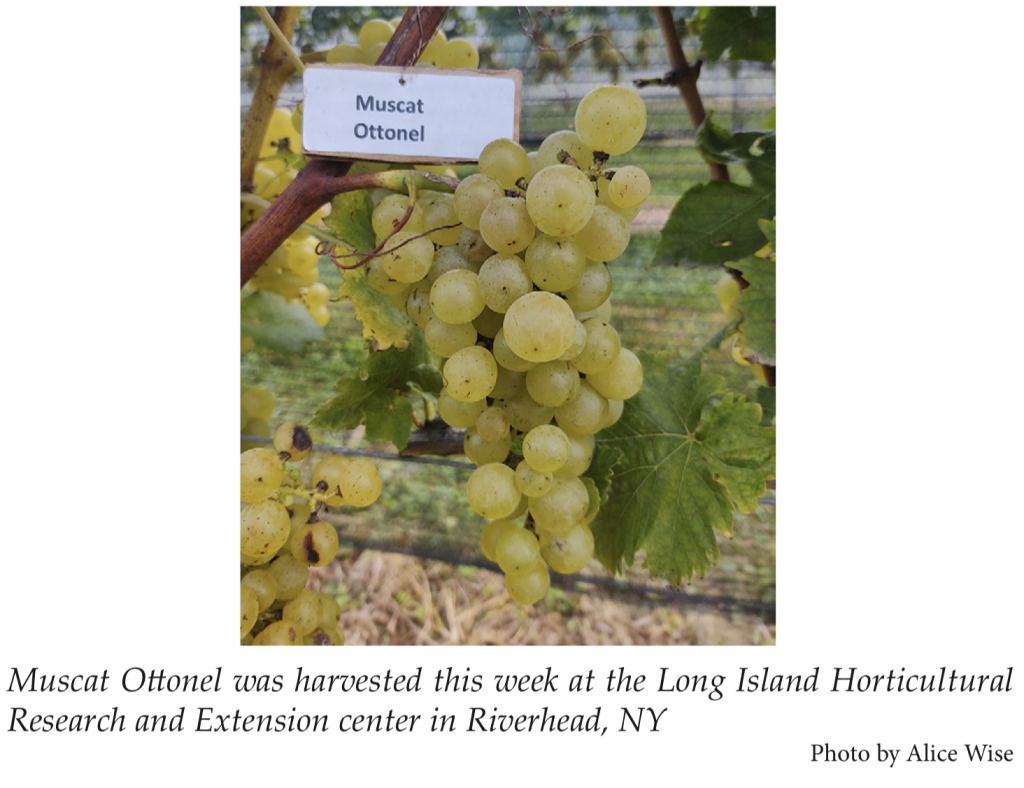 In the LIHREC vineyard, earlier varieties such as Zweigelt and Auxerrois were picked. Due to the worrisome forecast, Dornfelder, Pinot Gris, Muscat Ottonel, Malvasia Bianca and a few others were picked as well. Auxerrois and Dornfelder were both worked over by yellow jackets and fruit flies. In 25+ years of growing Dornfelder, it has never been attacked so voraciously so early in the ripening season. This could be due in part to its location on the end of a row. The scattered panels of Auxerrois varied. Some had more cluster rot/fruit flies/yellow jackets than others. Bird pressure at the LIHREC vineyard has been almost non-existent, a first. In the industry, there is some spotty pressure but overall has been lighter than in past seasons. Otherwise, Chardonnay and Sauvignon Blanc in the LIHREC vineyard have been holding up well. The latter may be picked next week depending on the forecast. The LIHREC vineyard harvest has to proceed gradually due to limited labor, something that businesses are increasingly facing..

This has been a season of fits and starts it seems. After an early bud break and bloom for many locations veraison came only slightly earlier than average and last week ripening appeared to come to a crawl for many vinifera blocks. Thankfully there was a nice jump in brix for many cultivars over the last week and temperatures in the high 70s and low 80s over the next week or so should push the chemistry numbers for many cultivars into comfortable harvesting territory. At the teaching vineyard Diamond, and Lemberger (for rose, 20 °brix, 3.02 pH, 8.9 g/l TA) were picked. Many vinifera-dominant operations are just now getting their harvester, shears, and bins in working order.

Berry weights seem an appropriate topic for this year. At the teaching vineyard we’ve been trying to use a Michigan State University (MSU) model that uses Growing Degree Days to predict final berry weight. The MSU model has most vinifera varieties reaching 50% of their final weight between 1100-1200 GDDs, with Merlot as an outlier at 1700 GDDs. Our data tells us that in the Finger Lakes the GDD number is likely closer to 1500 GDDs for most varieties with Riesling possibly being as late as 1800-2000 GDDs. Berry size is of course only one slice of the pie for crop prediction but this year may be a slightly outsized slice compared to most years At the teaching vineyard in Dresden we’ve been seeing a higher than normal population of stink bugs (since we didn’t have anything else to worry about). These are not the Brown Marmorated Stink Bugs (BMSB) that we’ve been trained to spot, but instead seem to be a native species. My best guess is Menecles Insertus. It’s not clear that these stink bugs release the same T2D chemical responsible for wine taint in some circumstances but assuming otherwise would seem imprudent. As a review, Oregon State University researchers examined BMSB taint. The cliff notes version is as follows:


In researching this article I also came across a festival in Taxco, Mexico that celebrates the feast of Jumiles, or stink bugs. So if you have any recipes send them my way.

The air officially smells of grape! There have been bins of grapes traveling down the road as Niagara harvest has begun, as well as early Concord grapes coming off of the vine, with reports of soluble sugars in the mid 12’s and a few at 13°Brix. Over the last two weeks, I have noticed that growth has slowed down and there is more wood maturation evident. With the weather forecast projected to warm up and dry out, I anticipate berry ripening picking up. 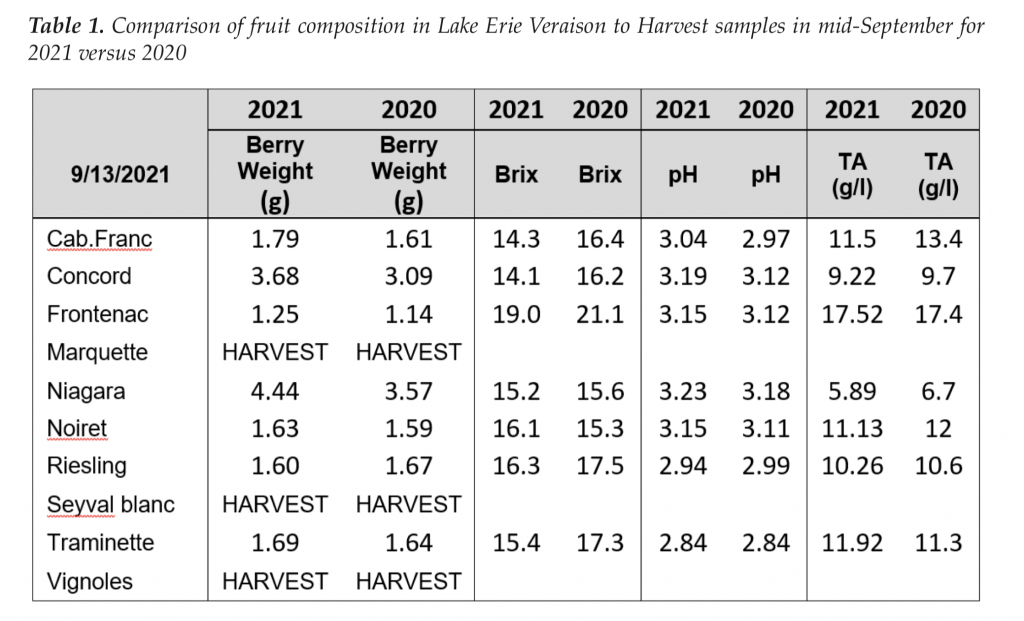 Perfection, of a kind, was what he was after,

And the poetry he invented was easy to understand;

He knew human folly like the back of his hand,

When he laughed, respectable senators burst with laughter,

And when he cried the little children died in the streets.

In the past week, all eastern New York regions gained GDDs versus 2020 year-to-date, although Hudson Valley continues to lag behind (Figures 1 and 2). Precipitation accumulation is largely unchanged from last week. 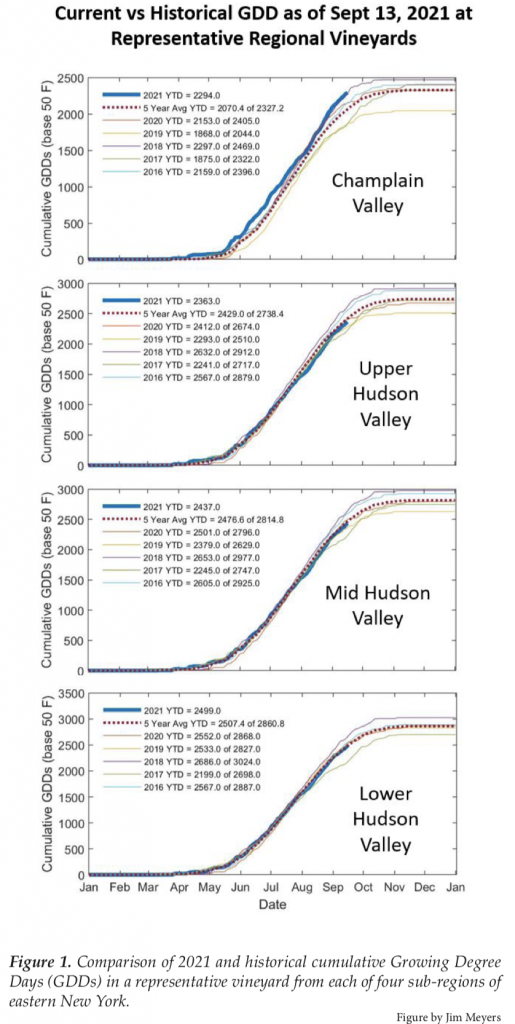 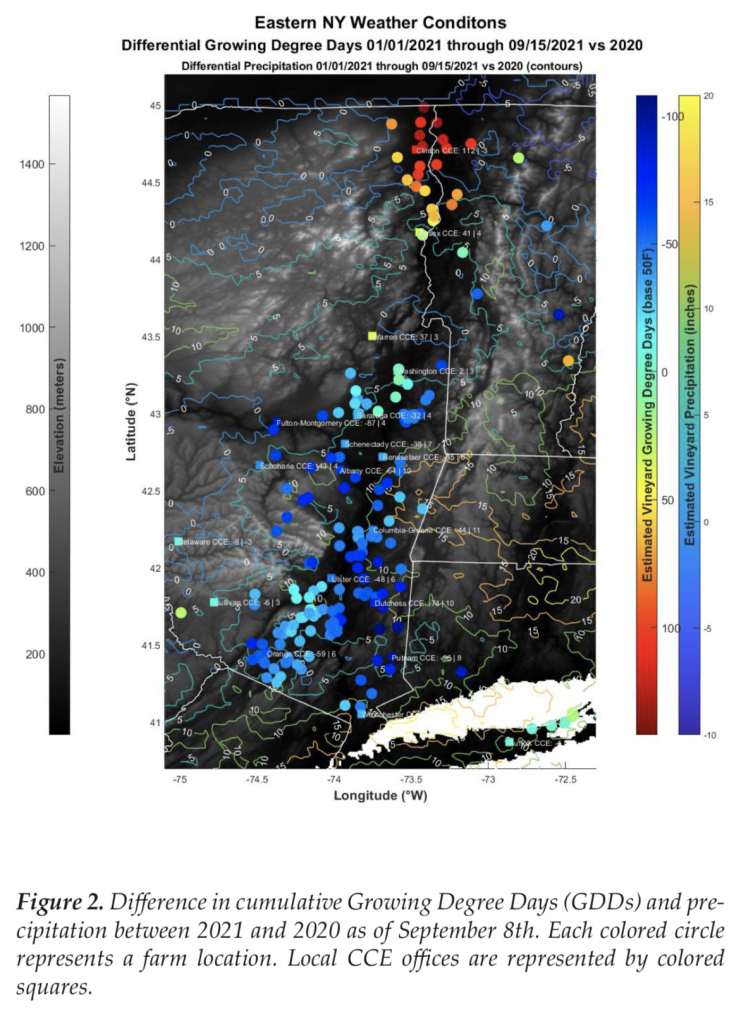 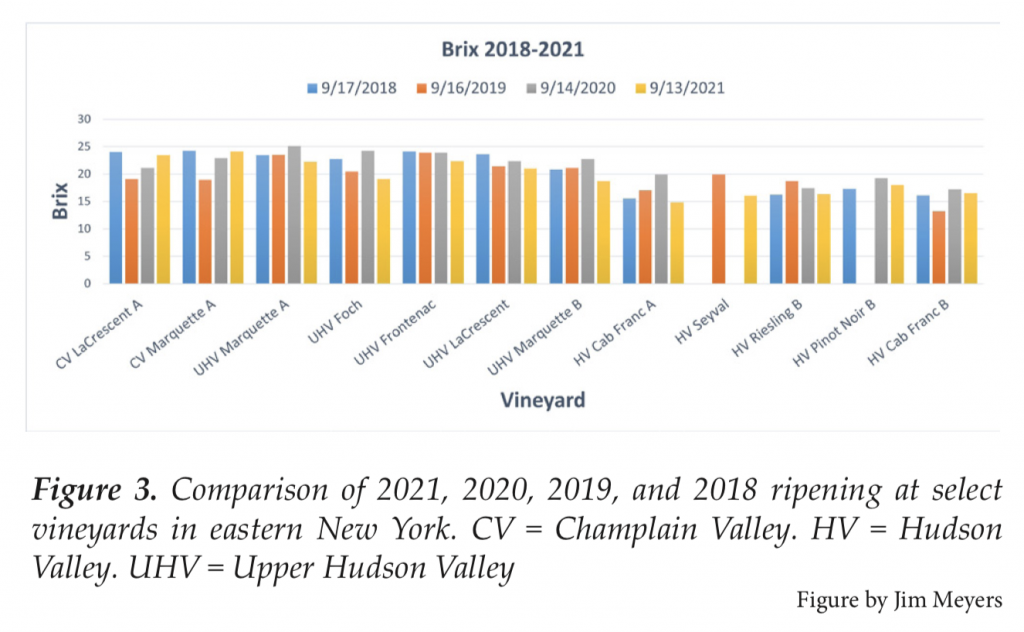 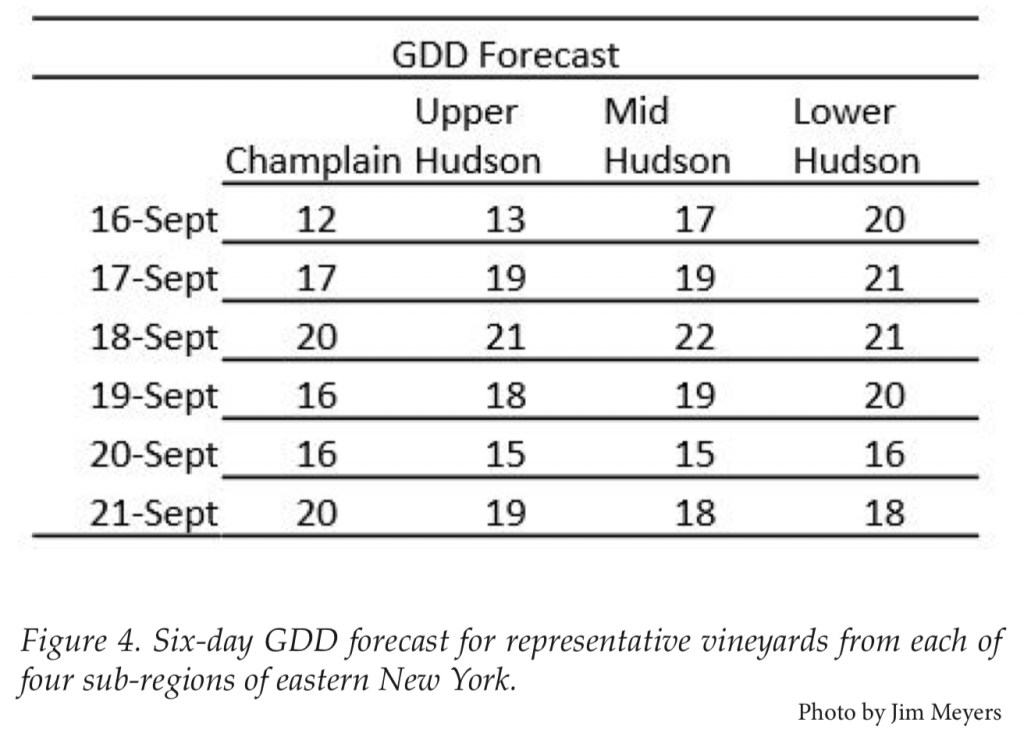