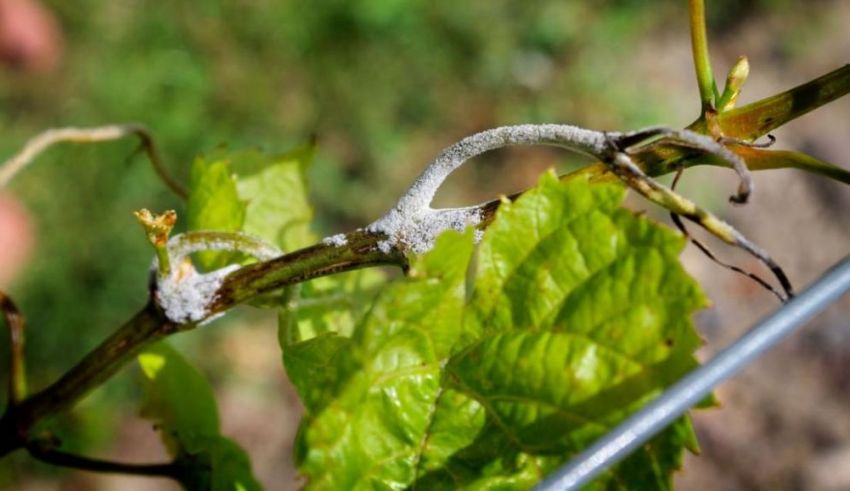 Grapevine: economic and agricultural valueGrapevine (Vitis vinifera L.) is a crop of great economic and agricultural value throughout the world. In 2019, the International Organisation of Vine and Wine (OIV) reported that over 7 million hectares are dedicated to the cultivation of this crop, resulting in the global production of about 78 million tonnes of grape and 292 million of hectolitres of wine.

However, a production of this magnitude is possible thanks to the massive use of pesticides to counteract various diseases that can affect grape yield. Indeed, pesticide applications are at the basis of intensive agriculture, as they guarantee protection from pathogens, pests and weeds. In absence of pesticide applications, farmers could experience up to 40% of production losses in a single year.

Impact of downy mildew in grapevineOne of the most severe diseases in winegrowing area is downy mildew, caused by Plasmopara viticola, an oomycete (an organism similar to a fungus). In absence of treatments and under favourable environmental conditions, downy mildew can affect up to 75% of vine crops in a single season, causing a huge drop of production. Plasmopara viticola attacks grapevine green organs, such as leaves and young fruits, especially at high humidity and mild temperatures. No effective biological control measures are known against P. viticola, and consequently, chemical treatments remain the only way to efficiently counteract this plant pathogen.

In Europe more than 500 substances are approved as pesticides (European commission, EU pesticides database, 2018) and most of them are able to inhibit key pathways of plant pathogens. Every year, pesticide sales are close to 400.000 tons in Europe and more than 4 million tonnes worldwide. Still, beside their beneficial effects on plant protection, the massive and repeated use of some pesticides can lead to environmental pollution and negative consequences on the health of consumers and agricultural operators. In addition, the arise of resistant pathogen strains to pesticides and, specifically for Plasmopara viticola to fungicides, is reported. Therefore, it is mandatory to rapidly find reliable and safe alternative solutions to conventional pesticides that specifically block the infections caused by plant pathogen.

GrAptaResistance projectFor this reason, five years ago, researchers from the Università degli Studi di Milano (Milan, Italy) and Fondazione Edmund Mach (San Michele all’Adige, Italy) investigated a new approach that could allow the development of low environmental impact alternatives to conventional fungicides. This project, called GrAptaResistance and funded by Cariplo Foundation (Italy), allowed the development of a new strategy in the agrochemical sector and the results of this work were recently published in Scientific Reports.

The project is based on peptide aptamers, short synthetic proteins able to specifically bind and inhibit a target protein. In GrAptaResistance project, the researchers isolated a peptide aptamer of 8 amino acids, capable to inhibit a key enzyme of Plasmopara viticola and therefore able to block the infection.

“We identified the peptide NoPv1 (No Plasmopara viticola 1) able to block pathogen growth at early stages of infection. NoPv1 was isolated among millions of different sequences and it is able to strongly bind and inhibit a key enzyme for Plasmopara viticola growth,” Prof. Pesaresi, principal investigator at Università degli Studi di Milano (Milan, Italy), explains.

The researchers also demonstrated that NoPv1 does not cause any damage to leaf tissues neither affect in any way the growth of other non-target microorganisms present in the soil that are important and beneficial for grapevine growth and production. Moreover, NoPv1 is not harmful for human cells.

Furthermore, the researchers proved that NoPv1 is also able to arrest the growth of another pathogen, Phytophthora infestans. This organism is also an oomycete, that can attack tomato and potato causing a serious disease known as late blight or potato blight.

FutureAlthough the results obtained so far are preliminary, this strategy represents an important step forward in the search for low environmental impact alternatives to conventional pesticides.

“Our technique can be used to identify natural peptides capable to counteract infections caused by various plant pathogens and promises to provide an important contribution to sustainable agriculture, less polluting for the environment and that has human health at its centre,” concludes Prof. Pesaresi.