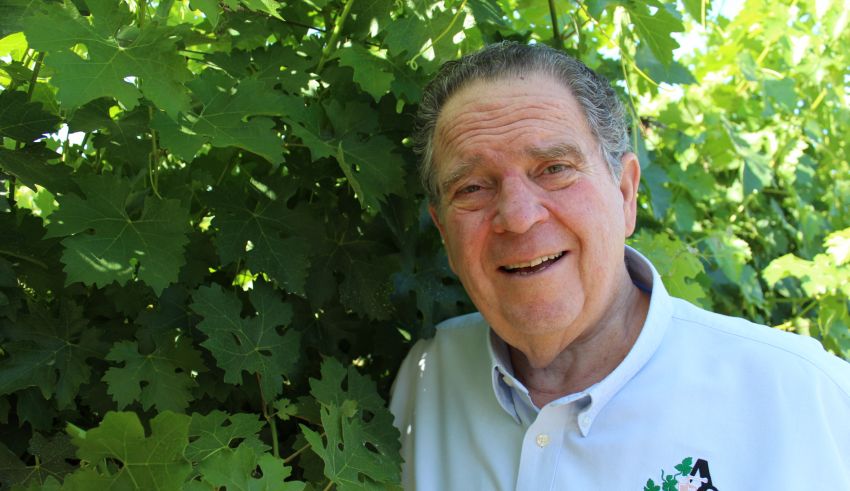 A Lifetime of Dedication to the Grape Industry

After 18 years of dedicated service to the California wine industry through Allied Grape Growers (AGG), Nat DiBuduo recently announced his retirement as President and CEO of AGG, effective June 29th. Vice-President of AGG, Jeff Bitter will officially take the reins as President and CEO on July 1, 2018, just prior to their annual meetings in the Central Valley and the North Coast.

Raised in the Grape Industry

Nat DiBuduo’s experience in the California grape industry started off as a boy on a vineyard that has since been redeveloped as the Copper River Country Club in Fresno. But the DiBuduo legacy in the grape industry began even further back to when both sets of his grandparents came from Bari, Italy as migrant farmworkers and settled in the Central Valley.

“My grandpa Mauro DiBuduo started farming with his two sons, Nat DiBuduo (my dad) and Angelo DiBuduo, and he developed their own label “Valley Pride” out in the Sanger area, farming wine, raisin and table grapes and stone fruit early on,” DiBuduo shared. “My other grandfather Dominic Papagni was a salt of the earth farmworker.”

“I grew up working summers on the family farm in Sanger,” DiBuduo continued. “When I was 12, dad eventually broke away from the main family farm, as it was not sufficient to provide for three growing families, and went to work for his Uncle Demetrio Papagni and his cousin Angelo Papagni on their vineyard operations. Dad ran their farming operations as general manager. We moved to what is now known as the Copper River Country Club, which used to be the Papagni’s home base ranch where they grew varieties like Alicante Bouschet, Grenache, Thompson Seedless, Zinfandel, etc.…”

Young DiBuduo would work there with his dad after school, on weekends, and throughout the summers. He worked in the packinghouse and with the field crews, thinning grapes/vines among other typical duties.

Eventually, DiBuduo attended college at Fresno State and graduated with a degree in Plant Science with an emphasis on viticulture, all the while continuing his work with his dad and the Papagnis. DiBuduo enjoyed learning from some of his greatest mentors in his early years – his college professor Vince Petrucci, Nat DiBuduo Sr. and Angelo Papagni.

About a year before graduating, DiBuduo married his wife, Marilyn in 1972, who also had a year left of school at the time. She was a criminology law enforcement major and came from an almond farming family in Easton. DiBuduo also took some business administration classes while at Fresno State, not knowing at the time what an important role that would play in his career.

After graduating, DiBuduo continued working for Papagni Fruit Company until 1984. He was in charge of the Madera County vineyards and served as the Papagni’s PCA. The Papagnis established a winery in the mid-70s, and wanted to enhance their wines with some new varietals. So DiBuduo was charged with developing some of their new vineyards and planting their first Cabernet Sauvignon, Chardonnay, Pinot Noir, Petit Syrah, Sauvignon Blanc, etc.… all very new varieties to the Central Valley.

“It was a great time and experience for me,” DiBuduo reflected. “My father was a great mentor, who taught me the in’s and outs of growing grapes. And for Angelo Papagni at that time to want to plant those new wine grape varieties in the valley – he had some great foresight in doing so, because no one else was doing that at the time; and the Papagnis are still producing great wines today.”

After college, DiBuduo’s brother Jerry also went to work for Papagnis. But in 1978, Angelo and DiBuduo’s father gave them an opportunity to learn something new and earn some extra money, by starting a farm management company – DiBuduo Land Management (DLM). “We expanded our farm management operations, and my brother continues to do a great job with that today,” he said.

But there comes a time for a change, and in 1984, DiBuduo was ready to try something new. DiBuduo was offered an opportunity to work for a company called Professional Ag Management as Vice President of Operations, which was a chemical company converting to an information management company. This company was one of the early pioneers of Ag IT, and DiBuduo was excited to work with them, as they were ‘light-years ahead’ of everyone else he had encountered at the time. “They were hiring scouts to go out and check fields for water stress, pest information, and other data to provide growers with an all around picture of how their fields were doing and how effective their spray programs were,” he explained. “We marketed these services to the large farming operations; but again, this new technology was very pricy and far ahead of its time, so it eventually closed up in 1989.”

DiBuduo learned a lot from his time there, and continued on in the business by doing his own individual consulting for a while, under DiBuduo Agri-Resource Services. In 1994, he went to work for Capital Ag Property Services, where he managed as much as 22,000 acres of assets. These properties ranged from the North Coast wine industry to vegetable crops in Salinas and Yuma, and Bermuda grass in Brawley – it was very diverse. “I stayed there until the job at AGG became available,” he said. “When the opportunity came up to get back into grapes fulltime, which was where my heart was, I jumped right into Barry Bedwell’s former position as President of AGG in 2000.”

“It has been an interesting run these 18 years, seeing the fluctuation in prices and popularity of different varieties, as well as the adaptation of the industry to changing political and environmental conditions,” DiBuduo expressed. Within AGG, DiBuduo has witnessed many changes as well since the year 2000, including growth in membership and in their tonnage. AGG makes up about 250,000 tons of the California grape industry.

“Also, the word quality means a whole lot more to our industry today than it did 18 years ago,” he said. “The quality of our growers and staff has increased over the years. We’ve worked with our growers to improve their quality, looking at cultural practices and fertility. Our field reps go around all year long to ensure the quality that justifies the higher prices we are asking for, and I think the coordination between the winery and the grower has improved overtime.”

Quality really has been based upon the expectation between the grower and the winery, and that varies in different areas. “Our membership is very diversified, as we have growers that produce two tons per acre at sold for $8,000/acre and then we have growers that produce 30 tons per acre for $300/ton,” he explained. “I’ve had to take good care of the interests of both ends of the spectrum and in between. Over the years, we have lost some Thompson Seedless growers, and we have gained growers of other varietals in different regions.”

The Tide is Turning

“One of my greatest challenges in recent years was back in 2015, when we had to tell growers that if their vineyards were not economically sustainable, then they probably should reevaluate what they were doing and consider pulling them out and planting something else,” he said. “I didn’t tell them this in order to maintain pricing in the industry; I told them this because I didn’t want them to lose their farming estates. I didn’t want to give them any false hopes if they were going to continue losing money.”

“So my departure shouldn’t be anything but positive,” he added. “I’m not retiring to get out of a bad situation. In fact, the industry is in great hands. One of the things I am most proud of is the team we’ve established at Allied Grape Growers. My successor Jeff Bitter is a great leader and is ready to take the reins. He’s been at AGG even longer than I have – 21 years; and we’ve built a great support team for him, field staff that knows how to market the crop, and provide great representation for our growers. We’ve added additional representation in the North Coast and in Lodi. Many of them are young and have many energetic years to serve the industry well into the future.”

At the age of 68, DiBuduo retires with deep gratitude, not only from AGG, but also the entire California grape industry and local communities. DiBuduo has a lifetime of great achievements and involvement in many agricultural groups and organizations. DiBuduo has held a California Pest Control Advisor’s License; a Qualified Applicator’s License and currently holds a salesman’s license from the California Department of Real Estate. Nat is a graduate of the California Agricultural Leadership Program Class VI. Nat is an Accredited Farm Manager AFM with the nationally recognized American Society of Farm Managers & Rural Appraisers. DiBuduo has developed, grown, harvested and/or marketed over 40 different varieties of grapes from A to Z – that’s Alicante Bouschet to Zinfandel.

The California Chapter of the American Society of Farm Managers & Rural Appraisers awarded DiBuduo the 2018 California Distinguished Agriculturalist of the Year. In October 2014, He was given the “2014 Profiles in Leadership Award” by the Agriculture Leadership Foundation. In January 2012, the California Association of Winegrape Growers (CAWG) recognized DiBuduo as CAWG Leader of the Year. Recognized for his many accomplishments and contributions in the State, Fresno County and City of Fresno, DiBuduo was appointed to the CSU Fresno’s Foundation Board of Governors.

He currently sits on many Boards including Past Chairman of the CDFA PD/GWSS Board, Friends of Fresno Fair, City of Fresno Mayor’s Advisor Committee to name a few. Through his leadership, the AGG team was awarded the San Joaquin Valley Agribusiness of the Year by Baker Petersen & Franklin in 2011. In 2007, DiBuduo was name Agriculturalist of the Year by the Greater Fresno Area Chamber of Commerce and was named CSU Fresno’s Distinguished Alumni of the Year at the 2008 Top Dog Awards. DiBuduo and his wife, Marilyn will have been married 46 years and have three children and their spouses’ and five grandchildren.

“True, I’ve been very active and vocal in the industry,” DiBuduo shared. “I guess it all started when I was student body Vice-President at Fresno State and went through the Ag leadership program. Serving at AGG has been the pinnacle of my career. My previous roles in farm management, independent consulting and vineyard development positioned me to understand the challenges facing California grape growers, and equipped me with the desire and ability to make a difference. Some may think I’m over-involved; but this is something that I am committed to. So although I’m retiring from AGG, I still plan on being involved in the industry and in my community.”

Editor’s Note: Click Here for a video tribute to Nat DiBuduo, as shared at the 2018 Allied Grape Growers Annual Meeting.