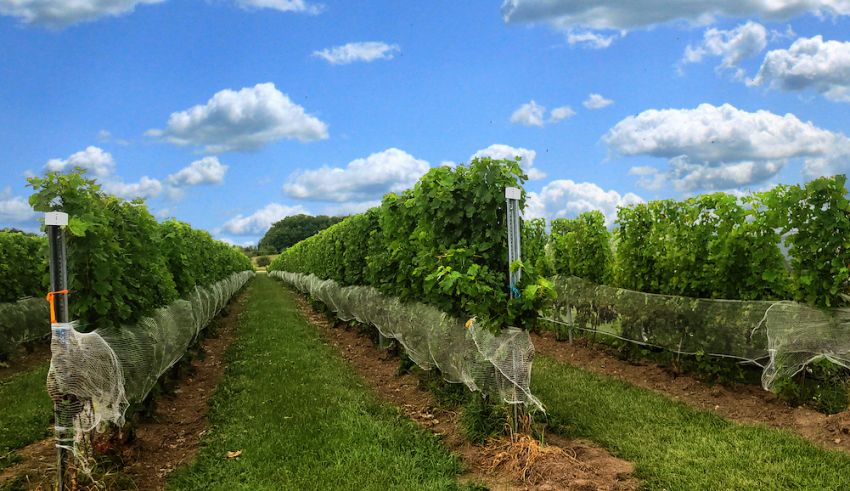 In southwest Michigan, harvest is continuing this week. Early hybrid wine grapes such as Marquette are being picked now. Harvest of some white vinifera varieties such as Sauvignon blanc is expected to begin by the end of the week. Crop adjustment work is finished and veraison in most of the varieties are completed in northwestern Michigan. (Pinot noir 10%0, Merlot about 80% veraison and Cabernet franc about 55% veraison).

At this time of the season, clusters greatly benefit from consistent sun exposure to reach the target fruit maturity and reduce humidity responsible for botrytis and sour rots. Together with leaf removal in the cluster zone, it is also important to apply crop control in late ripening cultivars. This can be done using the green drop technique.

Green drop is a grape-growing technique used to ensure the harvest of only the highest quality grapes. Grape clusters that are unlikely to ripen need to be removed and clusters showing signs of rot or that are too close to each other. Near the end of veraison, fruit that are lagging behind the veraison stage are removed. This reduces the variability in the ripening of the fruit to be harvested.

During fruit maturation, bird damage can be a challenge in vineyards. Crop losses can reach up to 95% and 60% in red and white varieties, respectively. Several methods of protection can be implemented including the use of bird nets, streamers, scare-eye balloons, electronic bird distress calls and propane-fired bird-scaring cannons. For more information on these methods, see “Bird damage reduction strategies in viticultural practices.”

Weed control is important at this time of the year to reduce weed interference in machine or manual harvest and to reduce the soil weed seed bank for the following season.

The application timing for most of the herbicides before harvest is mainly based on the pre-harvest interval (PHI). Aim (three-day PHI), Rely (14-day PHI), and Gramoxone (Restricted Use Pesticide) provide quick burn-down of weeds. Rely and Gramoxone control both broadleaves and grasses, but Aim is only effective for broadleaves. Venue (zero-day PHI) can be added to improve burn-down and broaden the weed control spectrum. Some herbicides will damage grape green bark, new shoots, leaves or vines, so minimize contact with vines during application.

Glyphosate also has a short 14-day PHI, but it is not advisable to apply it after bloom. Significant injury may occur during the current season or the following year if glyphosate comes in contact with leaves, green shoots or is absorbed by bark.

Detailed information related to the herbicide rates and efficacy on weeds can be obtained in the Herbicide section of E154 Michigan Fruit Management Guide, which contains lists of all currently labeled herbicides along with specific remarks for their use in vineyards.

Since many parts of the state are past veraison, the main diseases to focus on are bunch rots including botrytis and sour rot. Botrytis is becoming more common around the state. Several strategies contribute to good botrytis bunch rot management including opening up the canopy, effective insect control, properly applying fungicides, and using resistant cultivars when possible. Good botrytis control depends on getting good coverage. Just before bunch closure is the last chance to apply a fungicide to the inner part of the developing cluster. The most effective products for botrytis are site specific and prone to resistance development. A Michigan Grape Fact Sheet is available for managing botrytis bunch rot.

We have also been seeing sour rot in some vineyards in southwest Michigan. Sour rot is caused by a variety of microorganisms (e.g. yeasts and bacteria) and is often used as a catch-all for a variety of cluster problems. It is usually characterized by clusters that smell like vinegar, juice that drips over the fruit surfaces, a melting-type decay with skin slippage, and vinegar flies and fly larvae typically present. Recent research has shown a significant correlation between insect activity and sour rot movement. These insects have been primarily vinegar flies, but at MSU we have observed yellow jackets, honey bees, and bald-faced hornets on sour rot clusters.

Unfortunately, since sour rot is a disease complex involving many different yeasts and bacteria, we are still working to identify fungicides that are effective against sour rot. Recent research into a well-timed insecticide at 14 Brix along with a sterilant (e.g., Fracture or Oxidate) prior to sour rot symptoms is an effective method of control.

Another disease to not forget about is downy mildew. This disease is causing particular trouble for growers this year. The recent waves of rain and high humidity have created good conditions for repeated infection events. If they are permitted, fungicides that are broad-spectrum/contact like captan are effective products for resistance management. Viticultural practices that reduce canopy wetness such as good irrigation timing, leaf removal and good weed management can reduce these diseases in a vineyard.

The main concern with downy mildew at this time is late season defoliation. So far this season we have observed downy mildew more frequently than normal due to the high relative humidity and longer dew periods. Defoliation will impact winter hardiness and survival, as well as health of the vine next year. Effective fungicides for downy mildew include products in FRAC codes 4, 11, 21, 40 and 45 as well as phosphorus acid salts, captan and some biologically-based products.

Remember as you choose a fungicide, check the guide for potential phytotoxicity of certain sprays on Concord grapes especially (this has been particularly noted for fungicides like Revus Top). Phytotoxicity risk is higher with high temperatures and quickly growing vines. Also there is a significant phytotoxicity risk with specific contact products such as copper and sulfur for Labrusca type grapes (Concord and Niagara).

Growers should be on the lookout for an increase in grape berry moth damage in September due to a potential fourth generation of grape berry moth. A fourth generation was predicted to start egg laying last week in southwest Michigan. Our monitoring traps did detect an increase in moth captures last week, indicating a need for additional protection in high risk vineyard sites where cluster infestation was found in the third generation. Management of this last generation of berry moth will be most important for later harvested cultivars that still have more than a few weeks until harvest.

Southwestern Michigan has seen lower grape berry moth catches and damage levels this year compared to last season, indicating good control and/or lower pressure. This lower infestation is good news for these sites, but growers should also continue checking the status of their vineyards. Scouting from the MSU Extension team has seen an uptick in damage in the last couple weeks. Some damage is new, likely from freshly hatched larvae of the fourth generation of berry moth. Some damage is older and larvae, from later third generation egg hatch, inside are very mature.

Wasps and bees are starting to show up on ripening fruit. They are attracted to the accumulating sugars in the berries. Yellow jackets can be very damaging to the berries directly, causing wounds that can lead to cluster rots and reducing harvestable crop. They can also be frustrating to sprayers and harvest crews, trying to avoid being stung while working with the ripening grapes. Picking in cooler weather can help avoid wasp stings, but it is challenging to reduce their abundance with sprays at this time of the year due to the difficulty in controlling all wasps in a nest. Interception of wasps using traps deployed at the vineyard border can help reduce their abundance if the traps are placed at a high enough density.

Vinegar flies are starting to increase in abundance as more berries ripen and some fall from the vine or are opened by other insects or birds. These typical vinegar flies can develop on grapes only when the skin is broken, but with the presence of the invasive spotted wing drosophila in Michigan it is more important to keep a regular check on clusters for development of vinegar flies in berries.

Management of berry quality after veraison and treatments for sour rot (see above) can help reduce the impacts of vinegar flies. The presence of vinegar flies in the canopy can be easily determined by disturbing the clusters, as the small flies will take off and be seen around the clusters.

Presence of fly larvae in berries can be determined by putting fruit into a gallon bag with half a pint of salt solution (1 cup per gallon) for an hour, then looking in the solution to determine whether there are larvae present. If treatment is needed, there are several shorter PHI insecticides available that can provide temporary protection from SWD and other vinegar flies, including Mustang Maxx, Leverage and Verdepryn. — By Michael Reinke, Esmaeil Nasrollahiazar, Timothy Miles, Rufus Isaacs, Jacquelyn Perkins, Paolo Sabbatini and Sushila Chaudhari, Michigan State University Extension