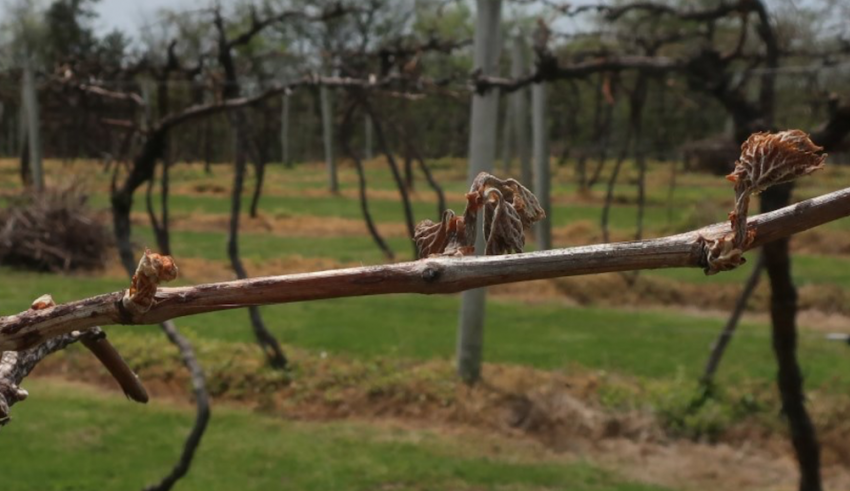 Air temperatures fell well below freezing throughout many areas of Missouri last Wednesday, April 21 (Figure 2) and Thursday, April 22 (Figure 3). A grape grower in Macon County, MO reported 21 °F on Thursday morning. The Marechal Foch shoots were completely damaged by these low temperatures the grower reported. Other growers have reported damage from the frost/freeze events. After a couple more days pass, most growers will have the opportunity to make a complete assessment. Some vineyard blocks had a very uneven budbreak, according to some grape growers. Potentially some of those latent primary buds may have been spared by the cold temperature events. As grape buds progress from winter bud scales, bud swell, wool to bud burst the susceptibility of the bud increases to cold air temperatures. For some grape cultivars damaged by the frost there may be a grape crop produced from both primary as well as secondary buds. This is important to recognize since it will result in an asynchronous bloom or simply an extended bloom period. Primary shoots that escaped frost/freeze damage will bloom first followed by a flush of bloom from secondary shoots. From a disease management standpoint, the most critical disease protection applications are at immediate pre–bloom followed by a post–bloom. Be aware that some grape cultivars damaged by the cold events may necessitate additional protective sprays during the critical period of immediate pre–bloom to post bloom. 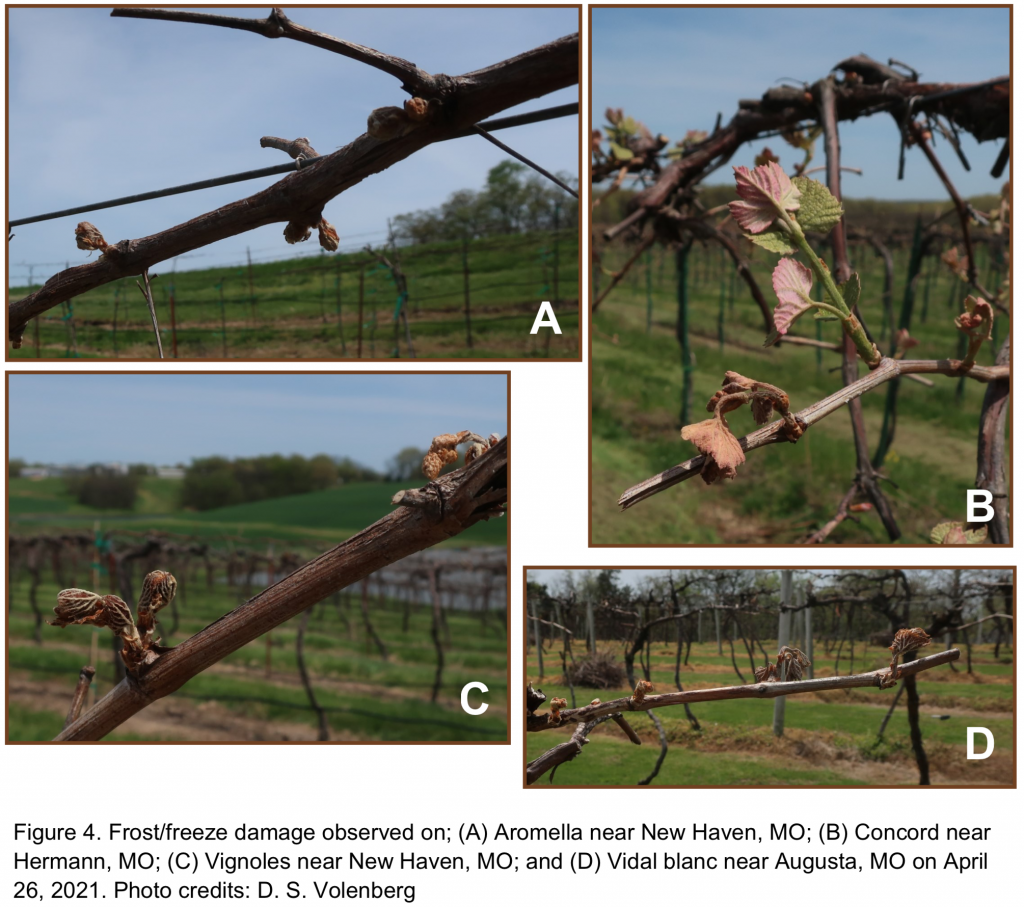 On Monday, April 26 I accessed damage to vineyards in the Hermann, New Haven and Augusta areas (Figure 4). In the Hermann area many of the vineyards came through pretty well with little loss of primary shoots. There was noticeable damage on Catawba, Concord, Traminette, Chambourcin, Valvin muscat. Norton was unscathed by the cold temperatures. In the vineyards I visited in the Hermann area, I estimate that 5 to 7% loss of primary shoots. In the New Haven area I examined Chambourcin and Vignoles that appeared to have approximately 1–inch shoots prior to the frost/ freeze events. All shoots were killed by the frost/freeze events. The Augusta area also had all exposed shoots killed by the frost/freeze events (Figure 1). Grower reports from the Ste. Genevieve area also report extensive damage. In contrast, vineyards north of KC had minimal damage based on grower reports.

In some respect we are almost seeing a repeat of the beginning of the 2020 grape growing season. On April 18, 2020 cold temperatures caused damage to some grape cultivars. The difference between this April’s frost/freeze events and last April’s is that in 2021 the minimum air temperatures were 2 to 4 degrees colder and the duration of the cold events were longer. This resulted in some growers thinking their vines survived the first round of the frost/freeze events on Wednesday morning. Unfortunately, for many of these growers, the second evening of frost/freeze events caused severe damage. 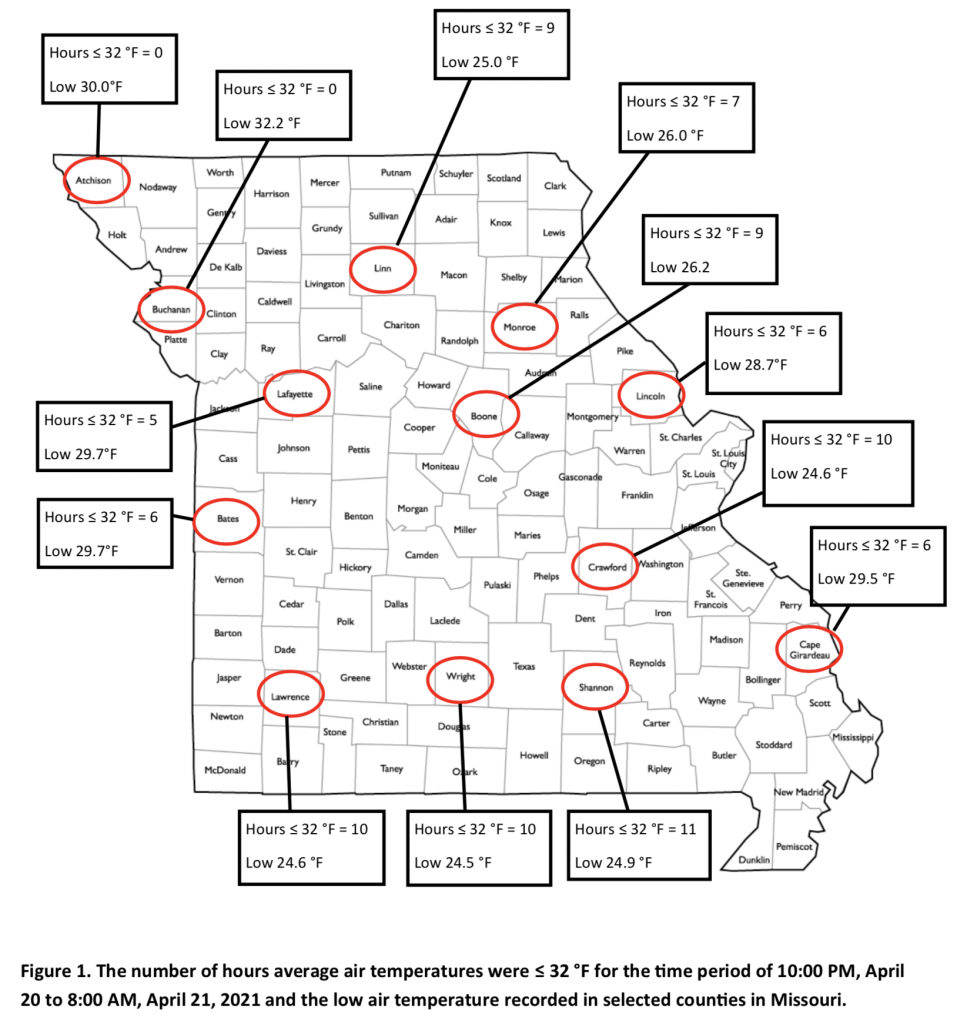 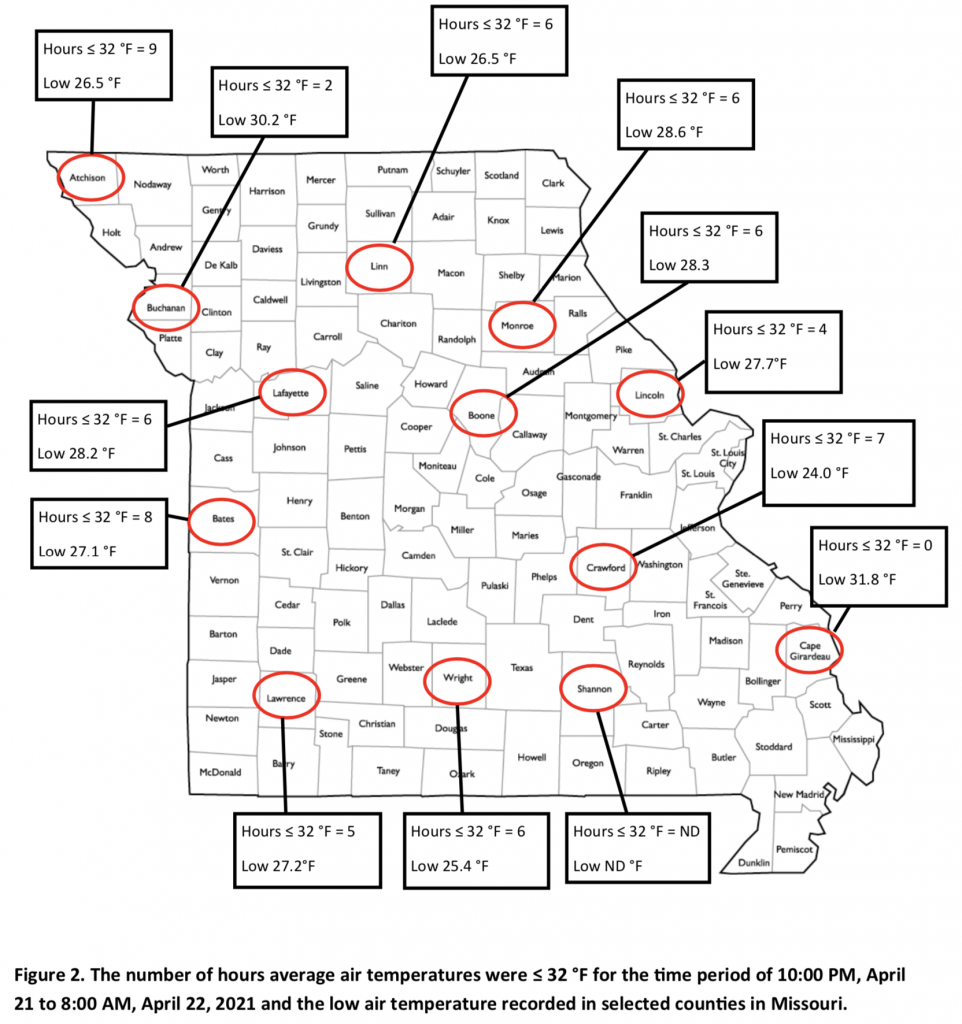 Please consider taking this short survey on how the frost/freeze events impacted your vineyard(s). The information from the survey will be provided to the Missouri Wine and Grape Board. The MWGB can then use the data to make an informed decision on issues that impact fruit and juice imports into the state for wineries with domestic winery licenses. The survey is completely confidential. The survey will take less then 3 minutes to complete. — By Dean Volenberg, University of Missouri Grape & Wine Institute