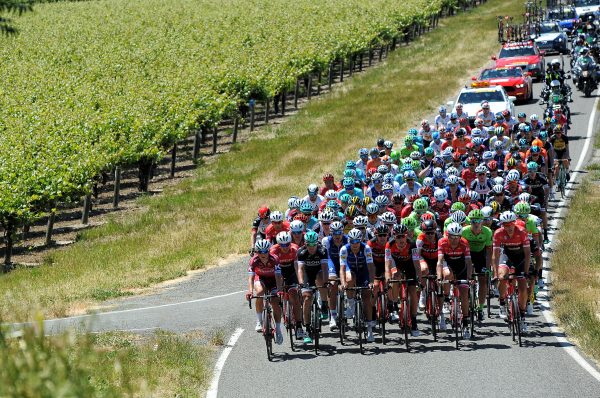 Lodi Wines recently announced it has been named the exclusive wine sponsor for the 13th annual Amgen Tour of California, America’s premier professional cycling stage race which takes place over 645 miles across the state of California May 13 – 19, 2018.

Lodi’s local wine producers, Michael David Winery, LangeTwins Family Winery and Vineyards, Klinker Brick Winery, and Estate Crush will feature many of their signature wines and newest releases at various high profile hospitality areas throughout the week-long event. The VIP Hospitality tents at each day’s  the finish line and the Team Presentation event will serve wines from Michael David Winery, LangeTwins Winery and Vineyards, and Klinker Brick Winery, and Estate Crush wines will be featured at the exclusive Chairman’s Dinner on May 12.

“Lodi, a popular destination for wine lovers with a community of avid cyclists, is thrilled to be a part of the action,” said Stuart Spencer, Executive Director of the Lodi Winegrape Commission. “The Amgen Tour of California attracts renowned cyclists and fans from around the world and Lodi is excited to have the opportunity to showcase our award-winning wines with this world-class event.”

The four Lodi wineries that are part of the Amgen Tour of California Lodi Wine sponsorship:

“Michael” and “David” are Michael and David Phillips, brothers whose family has farmed fruits and vegetables in the Lodi region since the 1850s and cultivated wine grapes for nearly a century. Michael and David constitute the fifth generation of grape growers in the Phillips family, with the sixth generation already on board.

Farming with future generations in mind, the Phillips have adopted some of the most progressive sustainable farming practices in the state. All 800 acres of the family’s vineyards are third-party certified, and the state’s first per-ton bonus was issued for contracted growers to follow in the family’s footsteps.

As part of a generational farm family dating to the 1870s, twin brothers Randall and Brad Lange grew up with the family passion for farming. Today, their ranch is a benchmark winery and vineyard in Acampo, just north of the city of Lodi. In addition to quality wines, LangeTwins Family Winery and Vineyards is focused on sustainability and habitat restoration. They have been recognized for their efforts by several organizations and are recipients of the 2006 Leopold Award and the 2014 International BRIT Award. Part of their sustainable program is noticeable while you visit – from the habitat restoration to the solar arrays.

The Felten family owns and manages Klinker Brick Winery and is a sixth-generation farming family crafting world-class wines since 2000. They own and manage 15 individual vineyard blocks of Old Vine Zinfandel that range in age from 40 to 120 years. In the 1990s, the family began to market its Zinfandel in the bulk market and in 2000, produced its first vintage of Klinker Brick Old Vine Zinfandel. They continue to produce wine from all their vineyard blocks, culling only the very best lots for their bottlings.

Founded in spring 2009, Estate Crush is owned and operated by Bob and Ali Colarossi and focuses on small-lot, custom-crush for premium wine production. The Estate Crush team makes wine for more than 50 different brands and more than 100 of Estate Crush’s wines have been selected as medalists in prestigious competitions.

Located 40 miles south of Sacramento and 90 miles east of San Francisco, the Lodi wine region benefits from a classic Mediterranean climate of warm days and cool evenings. A historic winegrowing region since the 1850s, Lodi cultivates more than 100 diverse winegrape varieties. From Iberian varietals like Tempranillo and Albariño to classic Rhône varietals such as Grenache and Cinsault, Lodi offers wines for even the most discerning palate.

The region also serves as home to 85 boutique wineries specializing in small-lot, handmade wines that have garnered major awards at domestic and international wine competitions. In 2015, Lodi was awarded the prestigious Wine Star Award for “Wine Region of the Year” from Wine Enthusiast Magazine. The recent increase in critic and consumer attention paid to Lodi-designate wines has fueled an astronomical growth in demand for Lodi wines, as well as tourism to the wine region.

Lodi is a leader when it comes to sustainable viticulture. Created in 2005, LODI RULES™ is California’s first third-party-certified sustainable winegrowing program and has received significant recognition over the years, having been awarded the Governor’s Environmental and Economic Leadership Award (GEELA) in 2006 and again in 2014. For more information about the Lodi wine region, visit lodiwine.com and lodigrowers.com.

About the Amgen Tour of California

The Amgen Tour of California and the Amgen Women’s Race empowered with SRAM are Tour de France-style cycling road races created and presented by AEG. Running concurrently, the races challenge the world’s top professional cycling teams to compete along demanding courses that traverse hundreds of miles of California’s iconic highways, byways and coastlines each spring. The teams chosen to participate have included Olympic medalists, Tour de France contenders and World Champions and award important, world-ranking points to the top finishers. More information is available at amgentourofcalifornia.com.