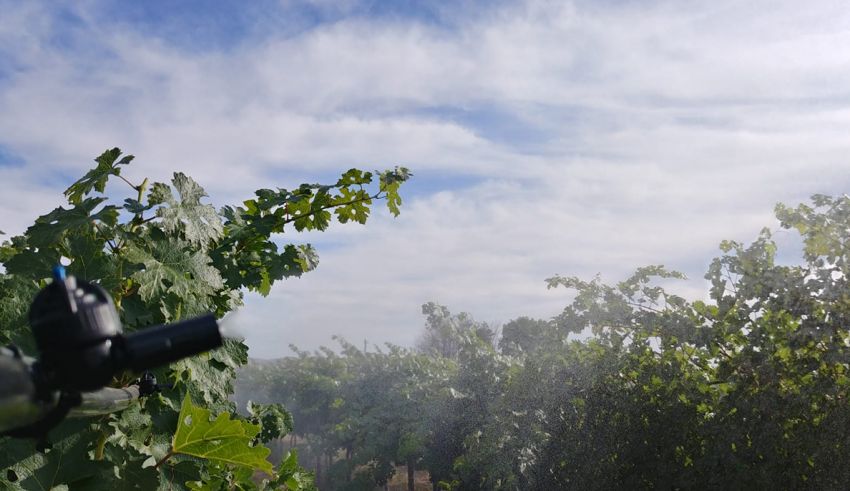 Markus Keller, professor of viticulture at WSU, is examining the effects of heat stress on grapes.

Heat causes physiological reactions in plants that affect growth rate and sugar content, and ultimately influence the flavor of wine.

“If grapes develop too rapidly, there will be too much sugar at harvest and too much alcohol in the wine,” Keller said. “Acidity also decreases with too much heat, making the wine taste bland.”

Vineyards that get too hot can also affect the color of the wine. To predict and prevent heat damage, WSU offers growers an online Growing Degree Days (GDD) tool.

“We track temperatures and make the data available through GDD,” said Keller. The tool estimates growth and development of plants during the growing season by comparing average heat throughout regions of Washington.

Since 2011, when the GDD tool was launched, each growing season has been unseasonably warm.

“Every year, the average moves up a little,” Keller said. “It’s getting warmer.”

Keller is now focusing on mitigating heat stress. In his research, he discovered that fruit quality is more influenced by temperature than water.

“That was something unknown to us before,” he said, and runs against prevailing wisdom.

“When we water stress the plant, it grows less. It turns out, the effects of this water deficit in terms of fruit quality is really about temperature,” he said.

To avoid overwatering plants while keeping them cool amid heat waves, Keller and his team have developed a cooling system for vineyard canopies.

“Heat waves in Washington can reach temperatures of 110 degrees Fahrenheit or more,” said Ben-Min Chang, a doctoral candidate in WSU’s Department of Horticulture who works alongside Keller. “This is a very hot region.”

Over-watering in response to heat can cause plants to become oversaturated with water.

“It eventually penetrates to the soil and reaches the roots, which can cause excessive growth out of sync with the normal season,” Chang said.

Chang said the Cabernet Sauvignon grape, which usually has a complex flavor ranging from blackcurrant to cedar, might end up tasting like a green pepper. “That is a sign of excessive growth,” Chang said. “Growing grapes is a balancing act. Growers need to ensure their response to heat doesn’t tip the balance.”

Over the past two growing seasons, Chang developed a mechanized machine to lower the temperature of vineyard canopies.

He used a sensor from an infrared thermometer gun to read the temperature of the canopy, and an electronic micro-controller to activate misters installed throughout the vineyard.

“I use the micro-controller as the brain, and I use the infrared thermometer as the eye to measure the temperature,” Chang said. The device automatically runs the water misters when the canopy reaches 95 degrees Fahrenheit.

Using a sensor to measure water saturation on canopy leaves, Chang was able to improve his device. When the sensor detects that leaves have reached their saturation point, the mist stops.

To protect his sensors from ultraviolet rays, Chang uses a shiny aluminum wine can.

“Aluminum is a great reflector, so the sensor inside is protected,” he said.

The software that runs the electronic cooling system is open source. Chang plans to do the same with his canopy cooling device, so any grower can build their own.

Following this season’s harvest, both Keller and Chang will see the results of their temperature control techniques.

In preliminary research, the team found that the evaporative cooling technique caused grapes to grow differently.

“The cooled grapes are already larger than the control group,” Chang said. While the control grapes take the brunt of the sun’s rays, those cooled with Chang’s device have fared better so far. Now comes the taste test.

“This experiment started in the vineyard and will end with us testing grapes and tasting the wine,” Chang said. “We’ll be able to see how the heat and evaporative cooling have affected the grapes and their overall quality.”

Wine-making normally takes four weeks after harvest, so Chang hopes to have more answers by the end of the year.

“We are thankful to the donors who allowed us to continue this important research,” Keller said. “We are hoping we can develop our cooling approach as a practical solution for growers and winemakers. — By Lauren Paterson, WSU College of Agricultural, Human & Natural Resource Sciences