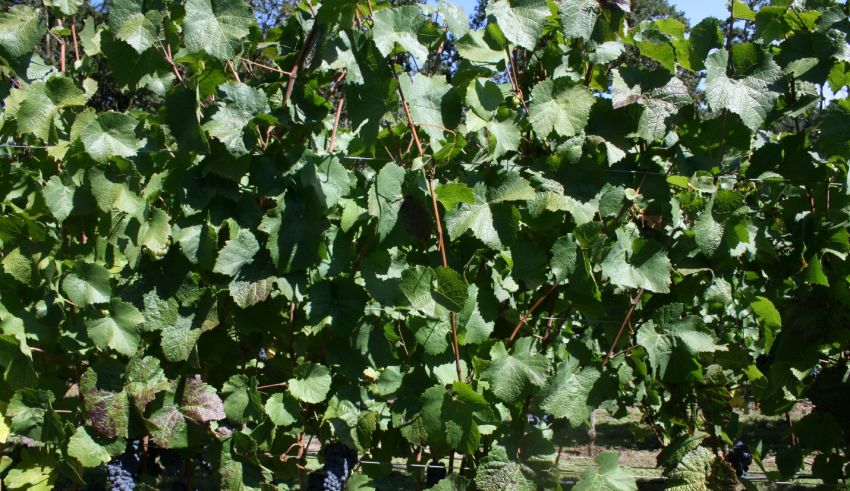 Grapevine Red Blotch Disease (GRBD) has been on the radar of the national wine grape industry for eight years. It is caused by a novel virus in the Geminiviridae family and the first virus of this family known to infect grapevines. Since the virus was identified in 2008 and first described as a potential threat to the industry in 2012, growers have begun to take note of vine symptoms and begin testing for the virus. Much of the concern about the virus came from its symptom similarity to Grapevine Leafroll associated Virus (GLRaV), including red leaves in red wine grape cultivars, delayed or lack of fruit ripening, and reduced fruit and wine quality. Much of the first information about vineyard impacts came from California, where anecdotal evidence from producers and research reported drastic reductions in fruit ripeness (total soluble solids or Brix), and color development (anthocyanins). A 2018 survey of the Oregon industry found that many producers were aware of GRBD and that vineyards were identified as having the virus throughout most of the state’s wine production regions.

Local Oregon research is needed to understand the full extent of the virus in our climates and cultivars. We conducted an observational study over three growing seasons (2017-2019) to understand how vines were affected in a Pinot noir vineyard with both healthy and virus-infected vines. The work was conducted in a commercial vineyard located in the Eola-Amity Hills AVA. The vineyard was planted to Pinot noir clone 828 grafted to Riparia Gloire rootstock, and it was ten years old at the start of the study. We monitored a population of 20 vines during the three-year period, focusing on three virus-symptom classifications, including 1) GRBD positive vines with symptoms (n=6), 2) GRBD positive vines that did not show symptoms (n=7), and 3) healthy vines that tested negative for GRBD and did not show symptoms (n=7). Individual vines were tested for GRBD by the USDA-ARS Martin Lab using PCR analysis. Vines were monitored for symptoms, growth parameters (phenological advancement, leaf area, and pruning weight), leaf photoassimilation and stomatal conductance (measures of photosynthesis and water stress, respectively), leaf greenness, tissue nutrient status at véraison, and yield and fruit composition at harvest.

Results of the study show that visual symptoms of the virus first appeared close to véraison each year. The timing of symptom onset varied year to year but was always on or after véraison. Symptoms included red blotchy leaf blades that varied in the amount of red blotches from a few to a fully red leaf blade, red veins, and delayed leaf yellowing and leaf senescence post-harvest. Red leaf symptoms started with the oldest leaves (base of shoot) and progressed upward as the season progressed. Nearly half of the vines in our study population that had GRBD were asymptomatic (n=7) during the three years of the study. Symptoms of GRBD+ vines (n=6) were not overt and would not be easily found unless closely inspecting the vines, as the red coloration was on very dark green leaves lending the splotches a purplish color (Figure 1). Leaf greenness was high for the duration of the study, indicating healthy green canopy leaves despite having red splotches develop during late season. As a result, we did not measure any differences in leaf photoassimilation of upper or lower canopy leaves during measurements made from mid-to-late summer each year. Likewise, there were no differences in stomatal conductance, a measure of plant water stress. Whether infected with GRBD or healthy, vines had no differences in overall photosynthetic capabilities. Furthermore, we found no differences in vine leaf area or dormant pruning weight, an important measure of vine size and vigor. Overall, this was a high vigor vineyard based on total canopy leaf area (annual means were 1.7-2.6 m2/vine) and dormant pruning weights (annual means were 75-104 g canes). Fruit yield also did not differ by disease or symptom class within any year.

This study showed a lack of differences in vine growth, physiological parameters, and fruit composition that suggests that GRBD can be present without causing significant concern for growers. The lack of virus impact on vines may be due to vine health status and lack of stress, as the vineyard was irrigated mid-to-late season as needed and vines were of high vegetative vigor. Furthermore, the vines were relatively young (10-12 years old). We believe the vines were infected since propagation and was brought to the vineyard site in plant material. We did not observe any spread in the vine population of this study, and symptoms became less severe in the cooler, wetter year of 2019 as compared to the warmer, drier season of 2018.