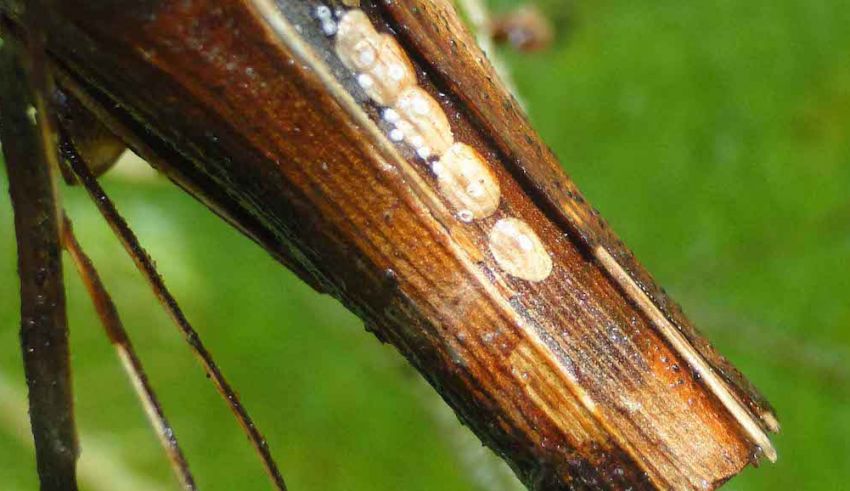 Unlike many other insect pests that we readily see in the vineyard, the grape scale remains mainly hidden out of sight. The hidden nature of the pest can result in the populations building up over time, but even these population increases remain hidden. Sometimes your first clue that scale insects are becoming a problem is when you see vine decline. Scale insects of which there are over 8,000 species worldwide belong to the order Hemiptera or true bugs that have piercing sucking mouthparts. Another grape pest the grape mealybug Pseudococcus maritimus also belongs to the order Hemiptera.

Grape scales are not readily seen in the vineyard since most of their lifecycle takes place under the grapevine bark. When scouting for grape scale the bark on the trunk, cordon or spur needs to be peeled away (Figure 1). Initially, focus your scouting efforts on grapevines showing signs of decline. Remove bark from the base of the trunk and work your way up to the cordons. If scale insects are not found on the trunk, grape scale will seldom be found on the cordon and spurs based on my experience.

The grape scale overwinters under the bark as a mated female and as spring arrives the scale resumes growth and development. The crawler stage is the mobile stage of development and occurs in May and June. The crawlers are mobile a short period of time (< 48 hours) before feeding and starting the process of secreting the scale covering. Females never move from their feeding site whereas winged males emerge in the spring and summer to mate with females. Seldom are winged males seen since the flight duration is short lived. This is very similar to male mealybug flight duration.

Grape scale can be very destructive if populations increase over time. If scouting results in turning up grape scale then a management plan should be started.

Prior to bud break, apply Superior oil to grapevine trunks and cordons. When applying Superior oil, be sure to saturate the trunk and cordons. This will result in the spray mixture running into voids and crevices under the bark where the grape scales reside. Superior oil spray solution must come in contact with the grape scale to be effective. All dormant oils cause lethality by depriving the insect pest of oxygen and by disrupting cellular membranes. Dormant oil sprays help preserve many of the beneficial insects since the application timing is prior to many of the beneficial insects emergence.

Lorsban Advanced and generics containing the active ingredient chlorpyrifos was the standard insecticide for the control of grape scale. Lorsban Advanced or generics containing the active ingredient chlorpyrifos can no longer be used in food crops in 2022 and beyond. On August 18, 2021 the EPA announced it was banning chlorpyrifos applications on all food crops. — By Dean Volenberg, University of Missouri Grape & Wine Institute