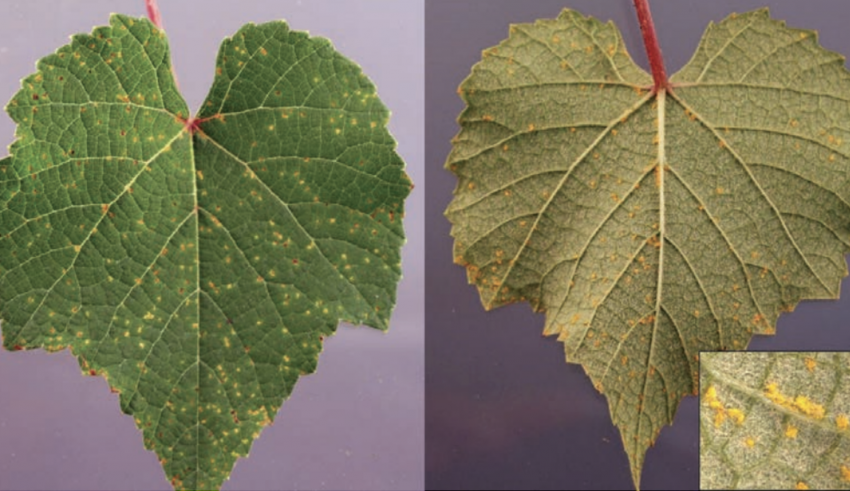 The Missouri Department of Agriculture – Plant Pest Control Program has tentatively identified Grape leaf rust on grapevines located at retail outlet. This is the first report of Grapevine Leaf Rust that I am aware of for Missouri. The disease has been reported in southeastern states including North Carolina, South Carolina, Georgia and Florida. In 2018, Tennessee reported Grape Leaf Rust on grape seedlings located in retail outlets in six counties. Historically, Grape Leaf Rust can be considered a minor disease compared to other grape diseases including Phomopsis, Downey mildew, Powdery mildew, Black rot and Anthracnose.

The initial symptoms reported by the University of Tennessee appear on the upper leaf surface as small angular, yellow or brown lesions. On the lower leaf surface yellow–orange pustules (uredinia) contain spores (urediniospores) (Figure 1). As the disease progresses, the lesions coalesce and turn from yellow to brown/black. If the disease is severe leaf drop may occur.

Some fungicides including Captan, mancozeb and DMI’s( Rally, Mettle, tebuconazole) should suppress Grape leaf rust according to the University of Tennessee.

At this time Grape Leaf Rust in not a problem within Missouri commercial grape vineyards. Therefore I am not advocating that any prophylactic fungicide applications be made for the management of Grape Leaf Rust. — By Dean Volenberg, University of Missouri Grape & Wine Institute