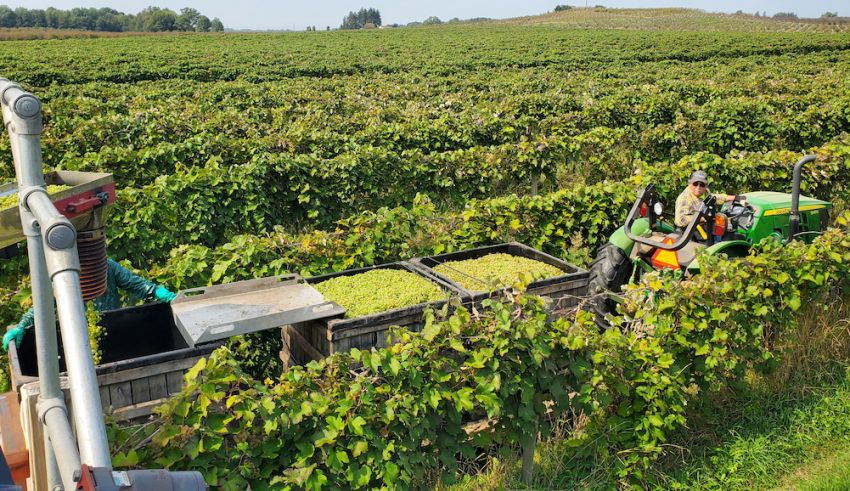 Michigan State University Extension — In southwest Michigan, most varieties are in the middle of or have completed veraison. Harvest has begun on early wine grape varieties for sparkling wine. Veraison is here in northern vineyards, and some early grape varieties are softening and their acid levels are dropping (Photo 1). In some locations in the Leelanau Peninsula, some early varieties such as Chardonnay are showing some berry softening. In the Tip of the Mitt, most cultivars are starting to see veraison.

Hedging is beginning in northern vineyards in Michigan. The main objectives of hedging are to cut back on extra primary and lateral shoot growth on the top and sides of the canopy to avoid shading and shoot entanglement between vine rows to make the vineyard more accessible to workers and tractors. Hedging can further encourage growth by promoting lateral shoot growth in robust vines, even though it indirectly reduces the canopy by removing primary and lateral shoots. Hedging is best done in the early to mid-summer.

Hedging is typically done between fruit set and veraison when primary and lateral shoots begin to bend (at a 45-degree angle), and it is critical to keep leaves, fruit and developing buds exposed to enough light in dense canopies with excessive vegetative growth. Hedging too early in the growing season should be avoided because it can lead to increased lateral growth and canopy density.

Over-cropping has been reported in some juice grape vineyards. Crop load management is critical to achieving your desired Brix level. In order to assess your cropload, use the MSU Concord model on Enviroweather and conduct a cluster thinning at 1500 GDD. For more information on this topic, see Crop Control in Grapevines, a report from the Southwest Michigan Research and Extension Center.

Weed control is important at this time of the year to reduce weed interference in machine or manual harvest and to reduce the soil weed seed bank for the following season.

The application timing for most of the herbicides before harvest is mainly based on the pre-harvest interval (PHI). Aim (three-day PHI), Rely (14-day PHI) and Gramoxone (Restricted Use Pesticide) provide quick burn-down of weeds. Rely and Gramoxone control both broadleaves and grasses, but Aim is only effective for broadleaves. Venue (zero-day PHI) can be added to improve burn-down and broaden the weed control spectrum. Some herbicides will damage grape green bark, new shoots, leaves or vines, so minimize contact with vines during application.

Glyphosate also has a short 14-day PHI, but it is not advisable to apply it after bloom. Significant injury may occur during the current season or the following year if glyphosate comes in contact with leaves, green shoots or is absorbed by bark.

Detailed information related to the herbicide rates and efficacy on weeds can be obtained in the Herbicide section of E154 Michigan Fruit Management Guide, that contains lists of all currently labeled herbicides along with specific remarks for their use in vineyards.

In the southwest, disease management of downy mildew, powdery mildew and botrytis fruit rot are the primary focus currently. The heavy dews we are experiencing means it is important to maintain protection against downy mildew. In the northwest, disease pressure is increasing and a high pressure of powdery mildew has been reported from Leelanau and Emmet counties and black rot is becoming more apparent as well. In southwest Michigan, there is significant powdery mildew disease pressure due to the mild weather. These conditions can cause powdery mildew populations to increase rapidly as thousands of spores can be produced in a one day from a single infected leaf.

In this growing stage, consider choosing fungicides that control all the foliar and fruit diseases. For example with downy mildew we are most concerned with foliar infection at this time and sprays should be timed regularly throughout the season when we experience heavy dews for optimal control. Downy mildew is caused by a fungal-like organism, so many site specific systemic fungicides that target other spring diseases do not work on downy mildew. Effective fungicides for downy mildew include products in FRAC codes 4, 11, 21, 40 and 45 as well as phosphorus acid salts and some biologically-based products.

If powdery mildew is the only concern, there are a number of products that are effective (FRAC codes 3, 7, 11, 13, U8, 50, and U13 as well as sulfur). Combining fungicides from different FRAC classes should also be effective while helping with resistance management.

As we approach veraison in the southwest, it is important to consider botrytis management. Several strategies contribute to good botrytis bunch rot management including opening up the canopy, properly applying fungicides, and using resistant cultivars when possible. Good botrytis control depends on getting good coverage. Just before bunch closure is the last chance to apply a fungicide to the inner part of the developing cluster. Fungicide resistance management is also important. The most effective products for botrytis are site specific and prone to resistance development. A Michigan Grape Fact Sheet is available for managing botrytis bunch rot.

Remember as you choose a fungicide, check the guide for potential phytotoxicity of certain sprays on Concord grapes especially (this has been particularly noted for fungicides like Revus Top). Phytotoxicity risk is higher with high temperatures and quickly growing vines. Also, there is a significant phytotoxicity risk with specific contact products such as copper and sulfur for Labrusca type grapes (Concord and Niagara).

The numbers of grape berry moth infested clusters were higher this week during our scouting as the third generation of grape berry moth picks up. Growers in this region should be planning their cover sprays for the third generation since egg hatch was predicted to start on Aug. 7 in the Lawton area. This late August protection of the clusters should prepare growers for the harvest season with vineyards that can have a lower risk of damage in the pre-harvest window. Always be aware of the predicted rain showers over the coming week and avoid application just before rain.

After the 2021 experience, we are carefully watching vineyards with weekly scouting. Growers should be doing the same to make sure cluster rots and vinegar flies do not develop to be too much of a challenge. Monitoring traps for spotted wing Drosophila have been added to vineyards in the southwest and we will report those trap catches in the coming weeks. We are already primed for seeing some late-season grape berry moth pressure in southwest Michigan given the early start to the third generation, and the long-lead weather forecast also calls for warm evenings. Continue to monitor this as we approach harvest and be prepared to control rots and their vinegar fly vectors with treatments once the berries reach 14 Brix.