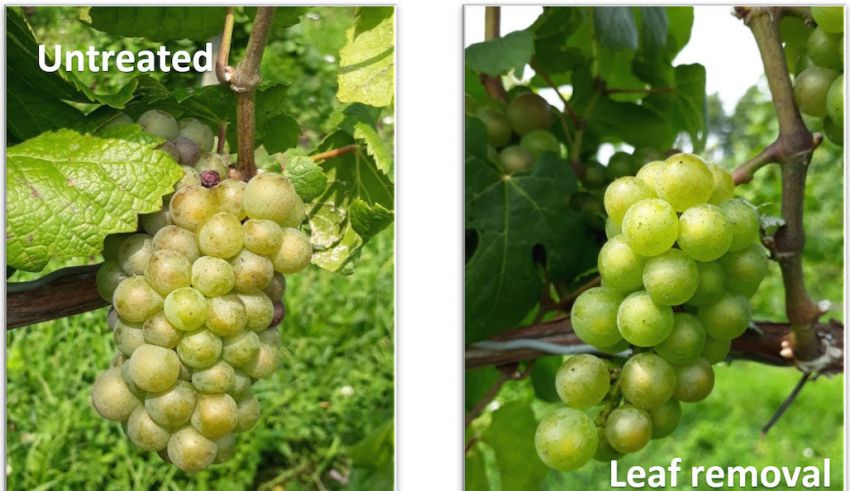 Early canopy management is one of several steps required to prepare the vines for good fruit production. Shoot thinning and leaf removal around the cluster zone are techniques commonly applied to open up the canopy, reduce canopy congestion and manage excessive yield. These canopy adjustments increase cluster spray coverage and improve light exposure and cluster temperature. They will also improve air circulation within the canopy, reducing relative humidity and making the canopy less conducive to pests and diseases.

Shoot thinning is an important canopy management tool to improve air circulation, minimize disease pressure, reduce shading and improve spray penetration. It can also be used to fine-tune the fruit-to-leaf ratio that was roughly set during pruning.

Timing of shoot thinning is very important. It is most effective when the shoots are 5-12 inches long. To avoid excessive lateral growth and crop loss, shoot thinning has to be performed after clusters appear, but the longer the shoots grow, the more difficult they are to remove, potentially causing vine damage (Photo 1). However, if the shoots bearing clusters are overcrowded, it may be necessary to remove them as well.

Early leaf removal in wine grapes is an effective way to control yield and improve fruit quality. The removal of basal leaves from main shoots and lateral shoots developed from basal nodes is known as early leaf removal. Early leaf removal is usually performed prior to or during bloom, after shoot thinning has been done. This operation is done manually or mechanically using the same mechanical leaf removal equipment used around veraison.

Before bloom, while the other leaves are still developing, basal leaves are the plant’s primary source of carbohydrates. Removing some of these leaves reduces photosynthetic production, reducing fruit set, decreasing berry size and changing the morphology of the cluster to improve air ventilation within the cluster.

A quality soil test or a previous year’s petiole analysis is important in understanding what nutrients the vineyard needs. Early season nutrient management will most likely include nitrogen (N), zinc (Zn) and boron (B). In addition, potassium (K) and magnesium (Mg) may also need to be managed at this time. Consider the amount of N applied in your vineyard. Too much can cause flowering to be delayed and vegetative growth to be accelerated. Too little will result in reduced vigor and less, lower quality fruit. So, the right amount of N is very important.

Many factors can influence the need for N, including soil type, variety, rootstock, weather and others. Evaluate vine N status based on general vine health, historical records, yield and laboratory results from soil and petiole sampling.

The general N application rule is based on the previous year’s yield. Approximately 3 pounds of N are removed per ton of fresh grape. As a result, adjust the amount of N applied based on the previous year’s yield. For instance, if you harvest 2.5 tons per acre, the recommended amounts of N are around 7.5 pounds per acre. However, keep in mind the general rule: Always adjust N levels based on soil type, rootstock, the amount of N in the irrigation water, and vine vigor.

In addition to the amount of N, the timing of N application is also important in achieving maximum N application efficiency. The application of nitrogen to vineyards in this short-season region is most efficient between bloom and six weeks after bloom, as it is most important at this time for early season shoot growth and pollen tube germination, which may increase fruit set. The advantage of applying N early in the season is that the canopy is rapidly growing at this stage, and N uptake efficiency is near maximum.

Zn deficiency is common in the viticultural regions of northwest Michigan, and it plays a role in protein synthesis, the production of some plant hormones and fruit set. Zn deficiency can cause stunted growth and the development of small, undersized leaves with vein mottling, clawed margins, and widened petiolar sinuses. Even if no leaf symptoms are present, poor fruit set and bunches of varying berry sizes can occur. As a result, vineyards commonly use pre-flowering Zn foliar sprays.

B is involved in the synthesis of plant hormones that regulate growth and fruit set. B deficiency causes stunted growth, zig-zag internodes, the death of shoot tips, and interveinal chlorosis in older leaves. In severe cases of deficiency, bunch and tendril abortion can occur, as can pollen tube growth, resulting in poor fruit set. Cupped leaves on young shoots are a symptom of boron toxicity, as are brown necrotic spots on the leaf margin and yellow streaks between veins.

The dry weight of a grapevine can contain up to 3% K, which is also an important wine component. K’s role is to aid in the regulation of water movement within the grapevine. K is essential for the development of berry color in red varieties. In severe cases, K deficiency manifests as marginal leaf yellowing in white varieties and marginal leaf reddening in red varieties, followed by marginal leaf burn, marginal leaf curling, and defoliation of all varieties. K is a mobile element, and as the vine grows, symptoms of potassium deficiency shift from basal leaves to younger leaves.

It is still possible to apply dormant applications to grapes. A dormant application is used to reduce the population of the fungal pathogens that overwinter in or on the vine’s woody parts, particularly phomopsis cane and leaf spot, black rot and anthracnose. Dormant products can reduce powdery and downy mildew inoculum, but these diseases can develop quickly from low inoculum levels in Michigan’s humid and rainy weather. Anything targeting mildews should be reserved for applications immediate pre-bloom.

With dormant sprays, coverage is critical because they are contact products and will wash off the plant. The fungal inoculum overwinters in the bark of trunks and cordons or on shriveled berries and stems. Complete coverage is necessary to get contact fungicides into those hard-to-reach areas.

Dormant sprays have a long history in grape production. Lime sulfur and Bordeaux mixture were some of the first fungicides used. Prior to synthetic pesticides, these dormants were considered a critical part of cleaning plant material prior to the growing season, but after pruning. They are still critical for grape growers in Michigan.

Bordeaux mixtures are sprays of copper sulfate and lime. They are described by the ratio of copper sulfate to lime in 100 gallons of water. For example, an 8-8-100 Bordeaux is 8 pounds of copper sulfate, 8 pounds of hydrated spray lime in 100 gallons of water. The lime is added to the copper to reduce the phytotoxicity of the copper. Lime sulfur is a mixture of calcium polysulfides formed by boiling slaked lime with sulfur. It can be fairly corrosive, so many grape growers have been more readily suspended lime sulfur formulations (e.g., Sulforix or Lime Sulfur Ultra) in their vineyards.

Once bud break occurs, contact fungicides that include broad-spectrum/contact fungicides like mancozeb and other EBDCs (e.g., Manzate) and captan (e.g., Captan) are effective and function similar to dormant applications by sanitizing the vineyard prior to bloom. If a grower is organic, early season oils may also be used, which try to suffocate overwintering fungal spores and infected tissues.

As buds swell, the primary insect and mite pests of concern for management at this time are erinium mite, scale, mealybugs, flea beetles and cutworms. Erinium mite is only found in isolated situations, but in areas with a history of Erinium mite, an application of Envidor miticide applied to the canes and trunks at bud swell is very effective at reducing infestation on the leaves later in the season.

Scale and mealybugs can be suppressed with a delayed dormant application of a horticultural oil, to smother them. Use sufficient water volume to reach into tight spaces on the vine where they hide.

Once buds have swelled, flea beetles can feed on them during the day, whereas cutworms feed at night. Regular scouting of vineyards can identify if they are active by looking for the insects or for their damage. Typically, flea beetles are found at vineyard borders, but cutworms can be across vineyard sites, especially in areas with weeds or sandy soils. Flea beetles and cutworms can kill a bud (and therefore a potential shoot and its clusters) but if they are only at low levels, it may not be worth treating for these pests. A threshold of 2% damaged buds is used to guide spray decisions for these pests.

Spring weed management is critical, especially if growers missed an application last fall. It is important to make a spring herbicide application before weeds start growing and get a foothold in the vineyard. Spring application should be made before bud break or emergence of new growth to avoid crop injury. The selection of herbicide depends on several factors including weed type and species, vine age, soil type and vegetation or crop residue.

Postemergent graminicides including Poast (sethoxydim) and Fusilade (fluazifop-p) are selective for controlling annual and perennial grasses. Fusilade is more effective on quackgrass than Poast. The addition of non-ionic surfactant or crop-oil-concentrate improves the efficacy of Aim, Poast and Fusilade.

Detailed information related to the herbicide rates and efficacy on weeds can be obtained from labels and in the Herbicide section of Michigan State University Extension bulletin E0154, “Michigan Fruit Management Guide,” which contains lists of all currently labeled herbicides along with specific remarks for their use in vineyards.