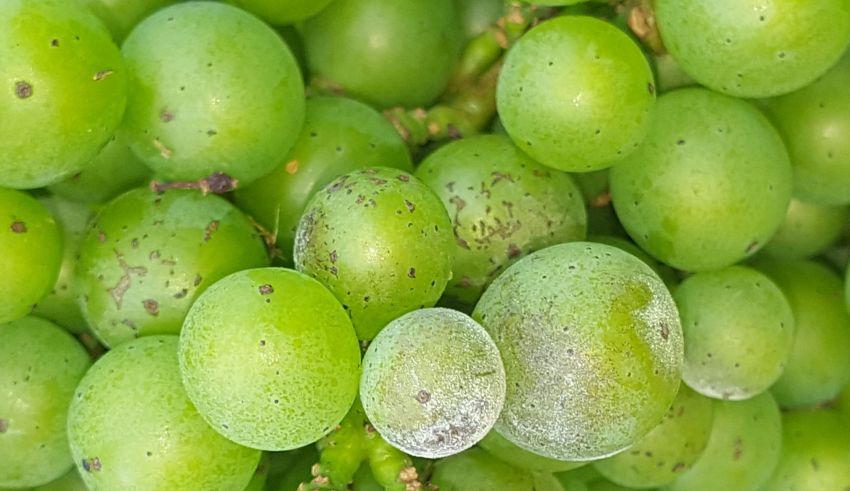 Powdery mildew appears as a powdery white substance on grapes

Fungal pathogens, like the ones present in many specialty crops, often change over time. This means, for example, that resistance to certain fungicides might also vary from year to year. Improved knowledge about which types of pathogens are present will allow growers to invest in the most cost-effective disease management strategies.

Timothy Miles, assistant professor and Extension specialist in the Michigan State University (MSU) Department of Plant, Soil and Microbial Sciences, works to understand how a pathogen functions to facilitate the development of pathogen monitoring tools so that more effective pesticides can be applied at optimal times.

“We need to understand the basic biology of the pathogen in order to figure out how certain fungicides work,” he said.

Miles is a co-investigator of a four-year, $4.75 million project, run through Washington State University, investigating resistance to powdery mildew, the most common grape pathogen in the United States. Powdery mildew is a foliar pathogen that causes a soft, powder-like white substance on leaves and berry surfaces, which can lead to yield loss, reductions in fruit quality and off-flavors in wine.

“I’m involved in the Extension and genomic aspects of the project,” he said. “For the genomic part, we wish to understand how these fungicides work so we can make tools to detect resistant fungi.”

Grape growers, particularly in California, where 80% of the nation’s grapes are grown, are using the monitoring techniques Miles and his colleagues developed.

“Private diagnostic companies have taken up our tools and are using them to guide their disease management plans,” Miles said. “They’ll run a test that detects a pesticide-resistant pathogen and then vineyard managers will decide whether or not to use a particular mode of action based on those diagnostic results.”

In Michigan, there are several major diseases that are actively managed using pesticides in grapes, compared to only two in California, due to the difference in climate. Powdery mildew, however, exists in both states. As part of the project with Washington State, Miles is analyzing how resistance information from powdery mildew can be applied to other important diseases in Michigan.

Miles, a Southwest Michigan native, grew up near grape orchards.

“Some of the juice grape growers are only about 15-20 minutes from where I grew up,” he said. “It’s always been a big part of the area and the economy, so it’s pretty exciting to work with them.”

Grapes contribute about $30 million to the state’s economy, according to the Michigan Department of Agriculture and Rural Development.

Miles, who earned his Ph.D. in the very lab he works in now, feels fortunate to be able to help Michigan’s grape industry, and the small fruit and hop industries as a whole.

“The most rewarding part of the job is that we’re making a difference for growers and hopefully helping them save money or get higher yields because they get less disease,” he said. “Keeping plants healthier — that’s the goal.”