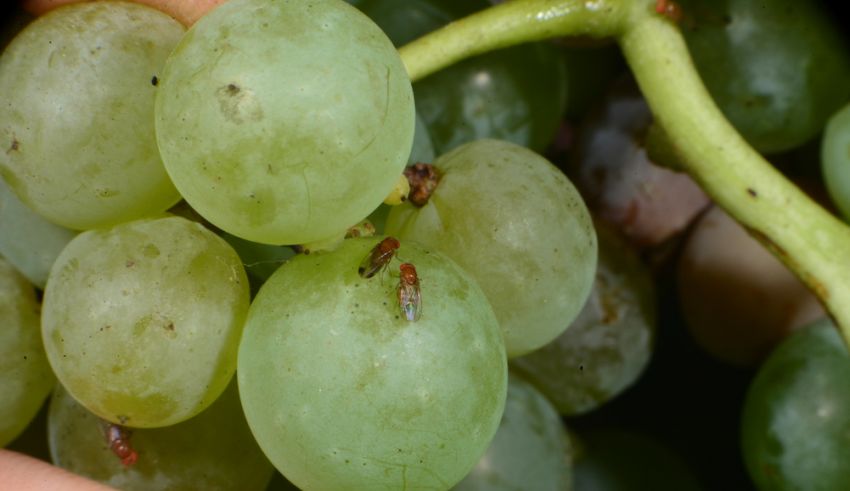 Unlike the New York grower, the Missouri grower had a varied insecticide rotation plan. Insecticides were applied from three chemical classes (Table 2). However, within a given growing season there were two to three applications of Mustang Maxx (Table 2). 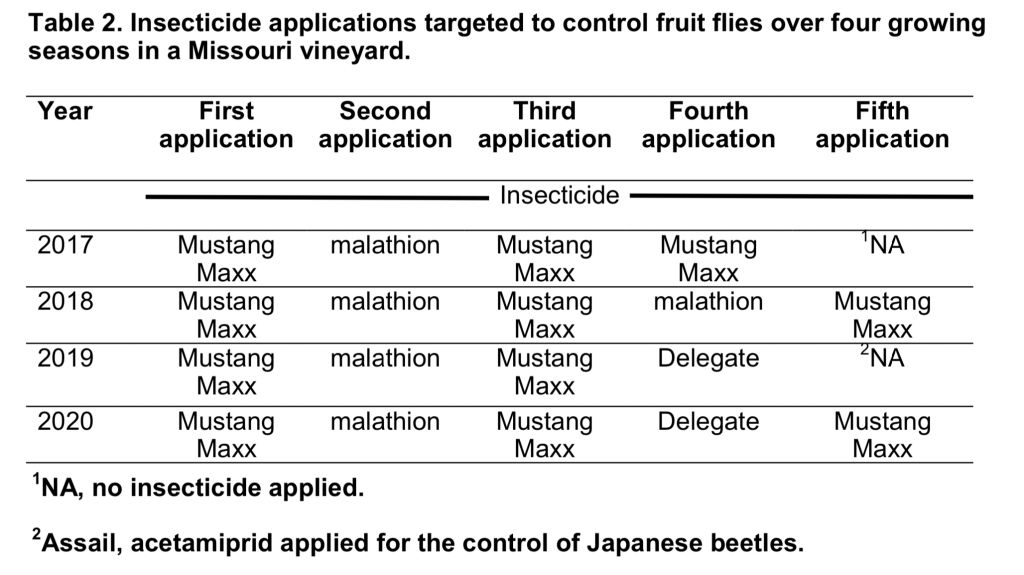 The Missouri fruit fly population may have experienced considerable insecticide selection pressure outside of the vineyard. Blackberries and peaches are established and producing fruit near some of the vineyard blocks. These fruiting plants flower and produce fruit well in advance of grape veraison and harvest. Both the blackberries and peaches received insecticide treatments for the control of Spotted wing Drosophila (SWD) D. suzukii mainly during the month of July. In addition, the growing areas of the blackberries and peaches had a considerable amount of cull fruit on the ground. The cull fruit would provide oviposition sites for both D. suzukii and D. melanogaster adult female fruit flies.

Additionally, a wound site is critical for the development of Sour rot. The wound site may be split berries in tight clustered and thin skinned cultivars such as Vignoles, loss of berry skin integrity from a hail event or the separation of the berry from the pedicel and berry junction. A wound results in the yeast starting the fermentation of grape sugars to ethanol followed by acetic acid bacteria converting the ethanol to acetic acid. The yeast and acetic acid attract adult fruit flies. The fruit flies have some unidentified microorganism that plays a role in initiating Sour rot disease. Therefore, adult fruit flies have been targeted for chemical control. Additionally, the incidence and severity of Sour rot has been shown to be decreased by controlling fruit flies.

Moving forward grape growers should strongly consider and insect resistance management plan. This plan should include a fruit fly trapping and monitoring program. Fruit fly monitoring relies on establishing traps and keeping track of trap captures prior to beginning of an insecticide program. Followed by monitoring trap captures after an insecticide application. The idea behind the monitoring is to identify if fruit fly populations increase after an insecticide application. If fruit fly populations increase after a targeted spray application for controlling fruit flies this is a good indication that fruit flies have developed resistance to an insecticide. If you have relied almost exclusively on Mustang Maxx for fruit fly control over the past two growing seasons, then these vineyard blocks should be monitored closely.

Insecticides targeted for fruit fly control should be from different chemical classes. Do not rely on an insecticide from a single IRAC class for control. Rotate chemical classes and do not use the same chemical class of insecticide in repetition. Also be aware that insecticides applied targeting other insect pests may be putting selection pressure on fruit fly populations leading to the development of resistance. These may include Mustang Maxx or Assail applied for the control of Japanese beetle or Grape berry moth. As you write up an insect resistance management plan be sure to look back at previous year’s spray records.