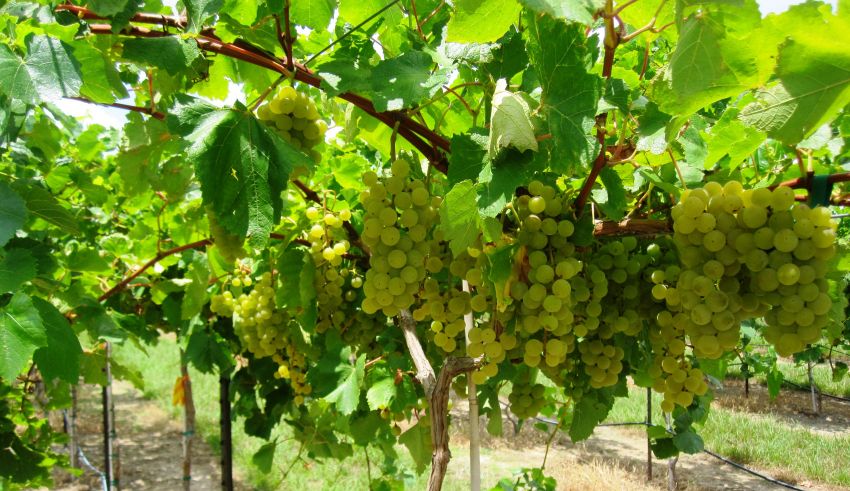 As many of us across the state are either in the midst of harvesting or are finished, we can take a look back at the season that Mother Nature threw at us. For most of us, both fall and spring were unseasonably wet. The rain acted as both a blessing and a curse. A blessing because the vines experienced little drought stress early on and vines grew vigorously. Vines broke bud and grew uniformly across blocks as well. Additionally, sites with high salt buildup may have seen some much needed leaching and many growers reported not needing to turn on irrigation at all during the spring.

The curse of increased precipitation amplified disease pressure across most of the state. Among the myriad of fungal pathogens typically seen it was noted that downy mildew reigned king across the Gulf Coast, North and East Texas. A few growers also reported positively diagnosed infections of phytophthora root rot in waterlogged sites. For sites that experienced excessive rain events land erosion was exacerbated and delays in performing critical vineyard tasks occurred. While the rain encouraged vegetative growth, some growers were caught off guard by just how much growth was taking place. Other growers were quick to adapt and focused heavily on canopy management. Nitrogen leaching, especially on sandy sites, was also a problem for growers who did not respond in a timely manner. Finally, rain fell and wind howled during the bloom time of certain cultivars in certain vineyard sites leading to a reduction in overall fruit set.

Once Mother Nature turned off the rain she quickly turned up the heat. Vines across the state appeared to be more sensitive to the common stressors that affect them during the heat of our Texas summer. This was primarily due to having little to no stress earlier in the season and developing large canopies. That being said, fruit quality reports coming in from across the state are incredibly high.  While growers have worked tirelessly throughout the season to attain clean, high quality fruit, work in the vineyard should not cease following harvest.

Texas is blessed with many sunny days and we still have 60-90 days before our first killing frost, depending upon where you live. This means that with no fruit on the vines any amount of carbohydrates produced via photosynthesis is pumped into the roots, which are actively growing at this time, and other permanent structures of the vine. This is an incredibly important process during the life of the mother vine. Therefore, it is of paramount importance to keep your vines stress free and their foliage healthy. Neglecting tasks such as irrigating and spraying for fungal pathogens can result in premature defoliation. This can result in additional stress, reduced cold hardiness, and depletion energy stores for next season.

This means we must continue to irrigate as needed, fertilize as necessary, and manage pest and disease pressure closely. Doing so will not only alleviate stress and reduce the potential for winter injury, it will also greatly enhance productivity the following season, and the season after that.  Remember that grapevines are a perennial crop that should produce reliably for decades. Consequences of either poor or proper management will undoubtedly carry over into each subsequent growing season.