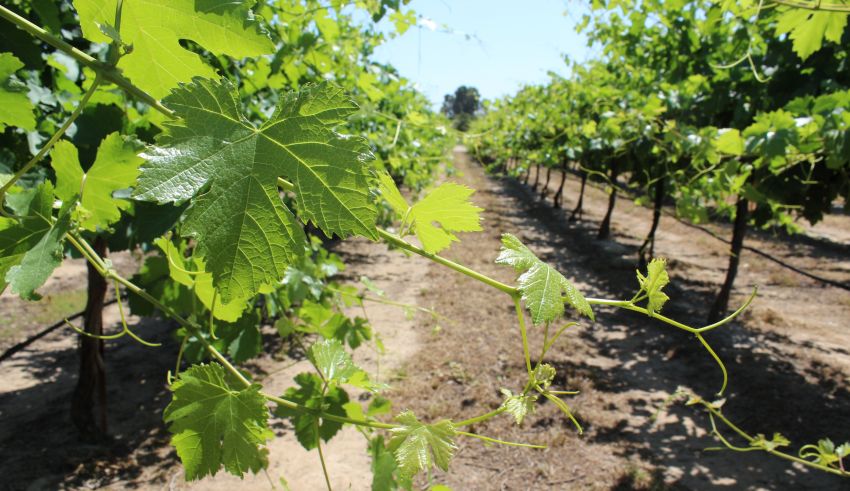 Nitrogen is one of the essential nutrients that grapevines need for growth and development. The important thing to understand about nitrogen is that too much nitrogen can be detrimental and on the opposite end of the spectrum, too little nitrogen can be detrimental. Finding the balance is critical. There are analytical tools to determine the amount of nitrogen in grapevine plant issue. There are also guiding principles that require an understanding of grapevine growth and development. Then there is you. You need to apply your observations in the vineyard about vine vigor, berry quality, and yield.

First, some basic principles on how nutrients move from the soil to the grapevine. Root hairs are responsible for water uptake from the soil solution. Nutrients such as nitrogen are dissolved in the soil solution. The transpiration of water from the grapevine leaves draws water up into the grapevine. Approximately 95% of this water is used to cool the grapevine. During transpiration mineral nutrients are transported to the active grapevine tissues above ground. Therefore, without optimum soil moisture such as during a drought period, there is decreased nutrient uptake and impeded photosynthesis. Soil dries from the top down and within this topsoil layer of the soil profile is where most plant nutrients reside. Although other horizons of the soil profile contain nutrients and have more moisture content during a dry or drought period, these soil horizons often lack sufficient plant nutrients for good grapevine growth and development.

The root hairs are responsible for most all the uptake of water and nutrients. Root hairs are not permanent roots and turn over approximately every 5 weeks. Common thought is that within the soil the root hairs deplete an area of nutrients and moisture and then die. The grapevine roots are not growing and developing until near the time of bloom. Prior to that period, starting near bud break, the plant hormone auxin starts to be transported to the roots. Another growth hormone gibberellin produced by the roots works in conjunction with auxin to produce root growth and elongation. Root development lags well behind shoot growth since the dormant shoot buds need to reconnect to the vines vascular system. So how is the newly emerging shoot growing and developing prior to root growth and development?

Starting around veraison, the roots start to store starch and nitrogen in cells that surround the xylem. As the soils warm in springtime the grapevines begin to bleed sap from pruning wounds. This sap is a result of metabolic activity in the roots breaking down the stored starch and proteins. Metabolism products such as carbohydrates and amino acids are then released into the xylem.

The difference in solute concentration (carbohydrates and amino acids) in the xylem draws water into the roots and pushes the sap upward. This sap is what starts bud-swell. After bud–burst the developing shoot continues to use the stored starch and nitrogen stored in the roots until approximately bloom.

With the roots nitrogen reserves depleted, the grapevine demands nitrogen at this time to start the process of replenishing nitrogen reserves. Also at this time near bloom and fruit set there is demand by the developing fruit for nitrogen. It is these very reasons why nitrogen should be applied prior to bloom. Previous recommendations of applying nitrogen prior to bud burst are no longer valid. As the demand for nitrogen is not occurring at budburst since the grapevine is relying on nitrogen stored as proteins in the roots.

As a grape grower, you are in the best position to determine if your vineyard is low vigor or high vigor or somewhere between. In high vigor vineyards, there may not be a need to apply nitrogen. In these cases there may be high levels of organic matter that mineralize throughout the growing season which releases nitrogen. A soil with 3% organic matter can release 60–70 lb. nitrogen/acre/year. Whereas a soil with 1% organic matter can release 20–30 lb nitrogen/acre/year. The amount of nitrogen mineralized from the soils organic matter is dependent on the soil temperature and moisture level. Low soil moisture from droughty conditions will result in less available nitrogen. Remember also that the vineyard floor cover crop will also utilize some of the available nitrogen.

In low vigor vineyards the addition of nitrogen will boost grapevine vigor. Nitrogen should be applied prior to bloom so that is readily available at fruit set. In late September of 2019, I established a Post–Harvest nitrogen trial in a low vigor vineyard. Nitrogen was applied at 0, 10, 20, 30 lbs/acre in a completely randomized design. The theory behind a post–harvest nitrogen application is that after the fruit is removed from the grapevine, the roots, trunk, and cordons become sinks for nitrogen. The grapevine converts the nitrogen to proteins and then these are metabolized next spring releasing amino acids to developing buds and shoots.

I know growers have been apprehensive about applying nitrogen late in the growing season as the nitrogen could stimulate grapevine growth and interfere with cold acclimation. Timing the nitrogen application is important as you need at least 4–weeks of canopy prior to a killing frost for nitrogen uptake. Not sure what the results will be of this research but I will keep you informed as it progresses.

Grapevines use nitrogen stored as proteins in the roots up to the time around bloom. After bloom the vines have a demand for nitrogen as the developing clusters become sinks for nitrogen. Also after bloom the grapevines start storing reserve nitrogen as proteins in the roots to replace the nitrogen lost during the period from bud–break to bloom. A petiole test at bloom can help you determine if nitrogen needs to be applied to your vineyard. Let the petiole results guide you. Also use your assessment of the vineyard in regards to vine vigor. The vineyard soils organic matter content can also be a source of available nitrogen for the grapevines. Remember that the nitrogen the grapevine is taking up from the soil this season has more impact on next year’s crop yield than the current seasons. — By Dean Volenberg, University of Missouri, Grape & Wine Institute