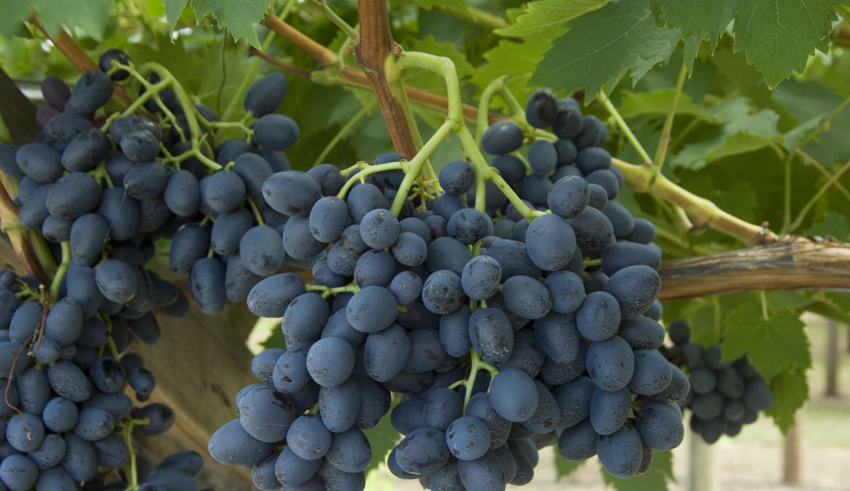 Australia’s table grape production is expected to continue to expand in marketing year (MY) 2020/21 and is forecast to reach a record 240,000 metric tons (MT), up 15,000 MT from the revised MY 2019/20 estimate. This higher production is due to increased vine plantings coming into fruiting, and nearly all of this increased production is expected to go for export. MY 2019/20 exports reached a record level of 152,500 MT as a result of strengthening exports to China and Southeast Asia, despite some COVID-19- related shipping disruptions. Further increases in production and exports are expected in the next few years due to continued growth in plantings and vines coming into production.

Australia’s table grape production is expected to continue to expand in marketing year (MY) 2020/21 and is forecast to reach a record 240,000 metric tons (MT), up 15,000 MT from the revised MY 2019/20 estimate. This higher production is due to increased vine plantings coming into fruiting, and nearly all of the increased production is expected to go for export. MY 2019/20 exports reached a record level of 152,500 MT as a result of strengthening exports to China and Southeast Asia, despite some COVID-19- related shipping disruptions. Further increases in production and exports are expected in the next few years due to continued growth in plantings and vines coming into production.

TABLE GRAPEProductionAustralia’s table grape production is expected to continue to expand next year and is forecast to reach 240,000 MT in MY 2020/21, up 15,000 MT from the revised MY 2019/20 estimate. This increase is a result of expanded production area and an exceptional bud burst in early September 2020 in Victoria.

Australian table grape production in MY 2020/21 is forecast to continue its recent trend of breaking production records. Over the last ten years, table grape production has grown by 142 percent (see figure 1). Although still in the very early stages, MY 2020/21 production has gotten off to a very promising start with industry reports of favorable conditions resulting in great bud burst in early September 2020, particularly in the key production regions of Victoria and southern New South Wales. This has been followed up by excellent bunch formation, setting the scene for high potential yields.

A key positive for the Australian table grape industry is that expanded area has been focused on new, proprietary, and export-oriented table grape varieties. The varieties chosen are driven by the strong demand from Asian markets such as China. Chinese consumers are increasingly turning away from seeded grapes like Red Globe to seedless varieties and are also interested in trying new varieties and flavors. 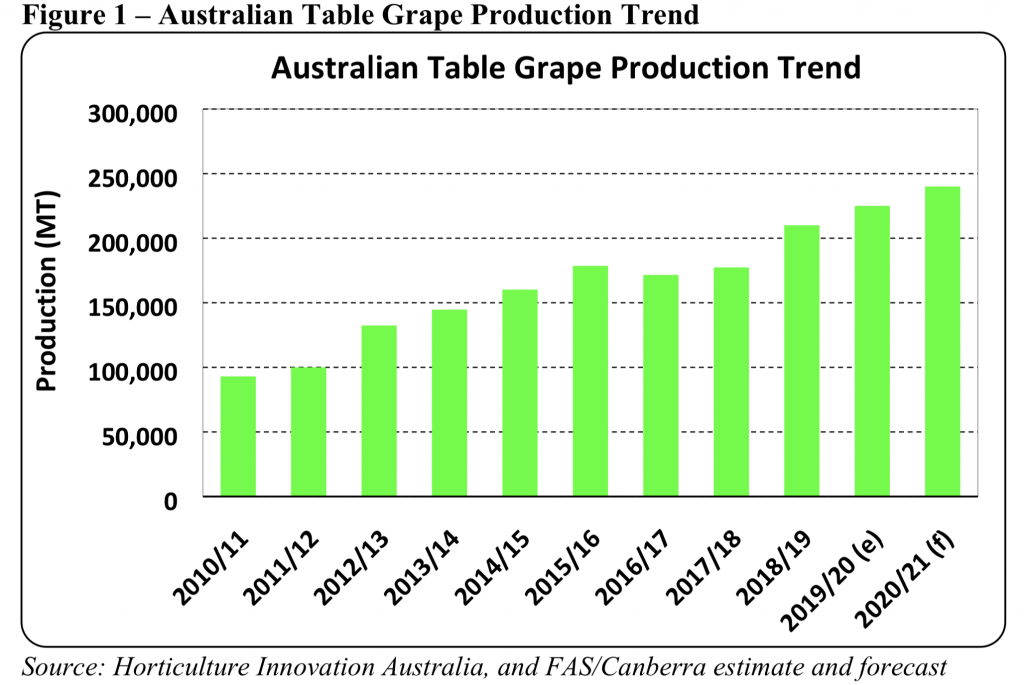 The majority of table grapes in Australia are grown in the Sunraysia and Murray Valley regions in northern Victoria, accounting for around 78 percent of production (see figure 2). Added to this are two Riverina region areas in southern New South Wales, accounting for around 10 percent of production. The key characteristics of these regions are that they are temperate climates with free draining sandy loam soil types and low annual rainfall of around 300 mm, most of which is between May and October and essentially outside the harvest period of November to May. Although winters are mild there is adequate cold chill period for the vines. These regions are very dependent upon irrigation to meet the vine water demands. These conditions support good bud burst offering high potential yields, and the low rainfall and warmer temperatures from spring to autumn minimizes the risk of frosts, humidity and hail.

Other important production regions are further north in Queensland, Northern Territory and Western Australia, which reach warmer temperatures earlier, bringing forward their production season. However, they also have warmer winters producing lower cold chill periods and making them less than ideal production regions. Table grapes in these regions mature earlier than the major production regions of Victoria, providing an extended supply period for the domestic market in the period after imports of U.S. grapes begin to wane and before harvest in Victoria begins.

Table grape production in Australia starts in October from Ti-Tree in the Northern Territory and then Emerald in Queensland and Carnarvon in Western Australia in early November. Production increases as areas further south progressively commence production and reaches peak production in February and March, when large volumes of production commence in the most southern regions of the Riverina, Murray Valley and Sunraysia. These regions are the last to finish production around May each year. 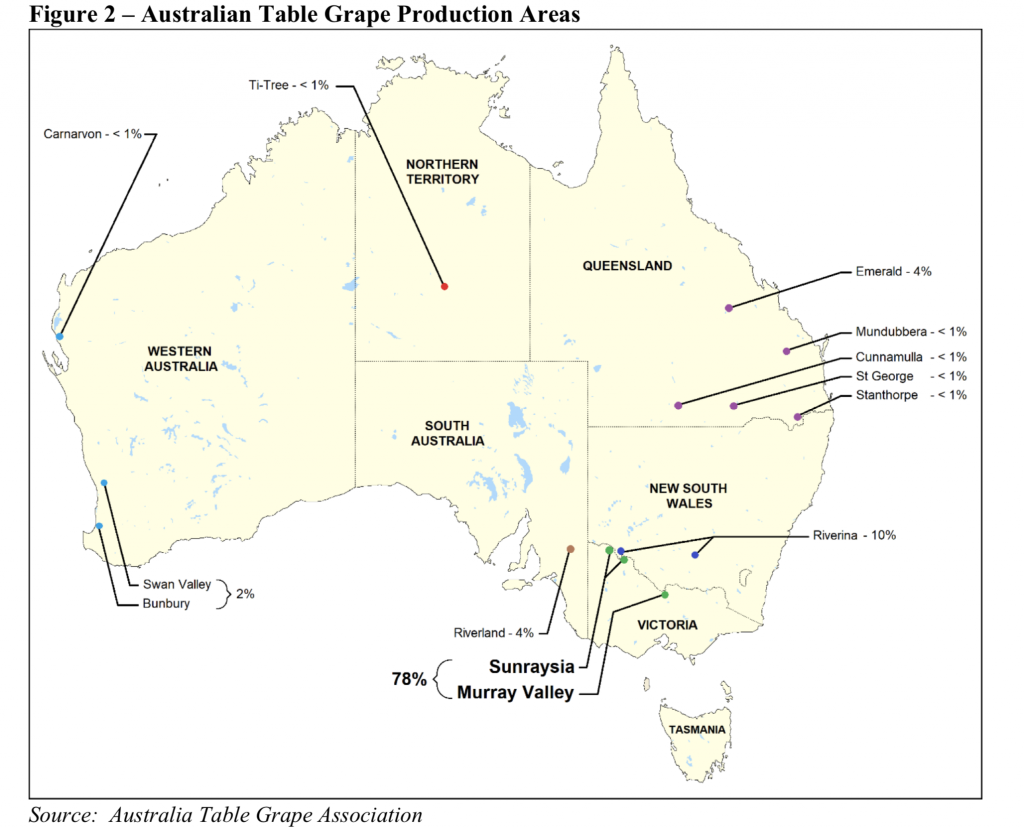 A key concern for the upcoming MY 2020/21 production season is the table grape industry’s capacity to harvest the whole crop in a timely manner. Industry estimates are that they require 15,000 temporary workers during harvest. This workforce has typically been made up of temporary visa holders which are primarily backpackers or from the Pacific Seasonal Worker Program. Due to the COVID-19 pandemic, a large number of backpackers have exited Australia and the number of Pacific Islanders coming to Australia has diminished due to the mandatory 14-day quarantine period and the associated cost of around AU$3,000. The federal government is aware of the agricultural industry’s concerns and is exploring a range of options to improve harvest labor availability. These options include incentives for university students to engage in harvest labor and travel bubbles between Australia and some Pacific Island nations in order to mitigate the need for the current mandatory quarantine period.

A further issue has been border closures between states which has limited the movement of harvest workers. In early September 2020, five states and territories signed up to a National Agricultural Workers Code, which is expected to alleviate this issue.

The production estimate for MY 2019/20 was revised down from 240,000 MT to 225,000 MT. This revised estimate is still a record. MY 2019/20 had generally good seasonal conditions throughout most of the production areas. The earlier MY 2019/20 forecast is likely to have been somewhat optimistic in relation to the area of new plantings coming into production and old vines being removed and replaced with new varieties. A further contributing factor was the introduction of some state border restrictions associated with the COVID-19 pandemic which commenced in Australia in March 2020 and had some impact on harvest labor availability. In addition, high irrigation water prices might also have impacted production.

FAS/Canberra forecasts table grape consumption to increase slightly in MY 2020/21 to 88,000 MT from a revised estimate of 86,500 MT for MY 2019/20. MY 2019/20 consumption was up over 10,000 MT from the previous year as some trade disruptions caused by the initial COVID-19 outbreak around February/March 2020 resulted in more grapes remaining in the domestic market.

Due to strong Asian demand, prices paid for exports are typically significantly higher than those in Australian retail, which is expected to limit the growth in domestic availability. Domestic table grapes are largely available in the market from December to May, with imported grapes, almost exclusively from the United States, available from August to November. 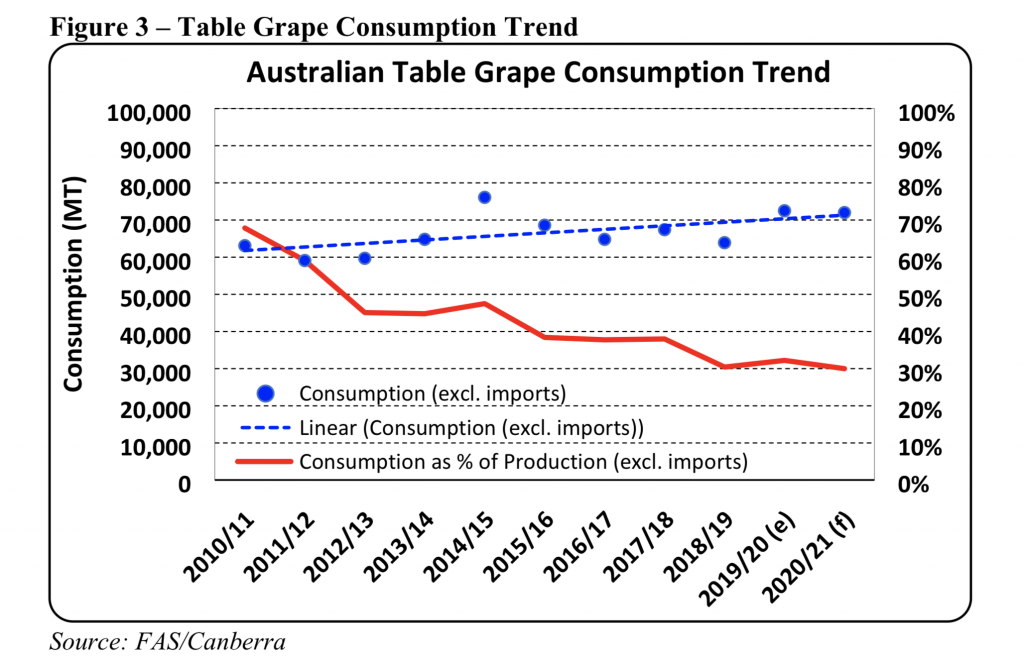 As Australian table grape production has increased over time, domestic consumption has shown an upward trend, with variability from year to year. This variability is primarily driven by the degree of price premium available on the export market relative to the domestic market, and variance of overall fruit quality from year to year. A decade ago, domestic consumption (excluding imports) represented almost 70 percent of production and it is forecast to fall to 30 percent in MY 2020/21 (see figure 3). As was previously mentioned, when choosing new varieties most growers are primarily focused on export opportunities and demand, rather than the domestic market. 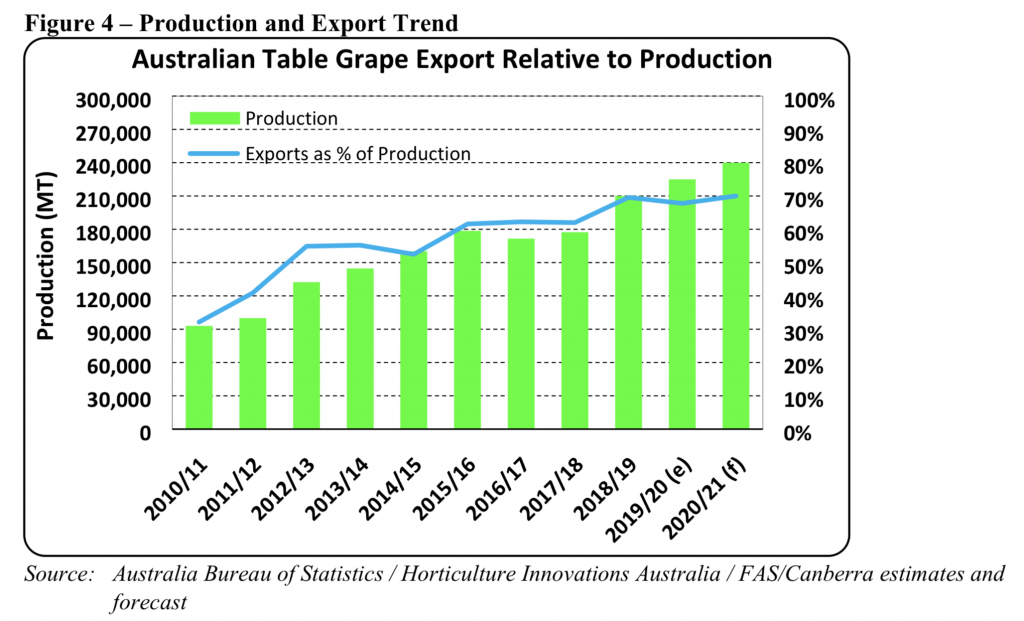 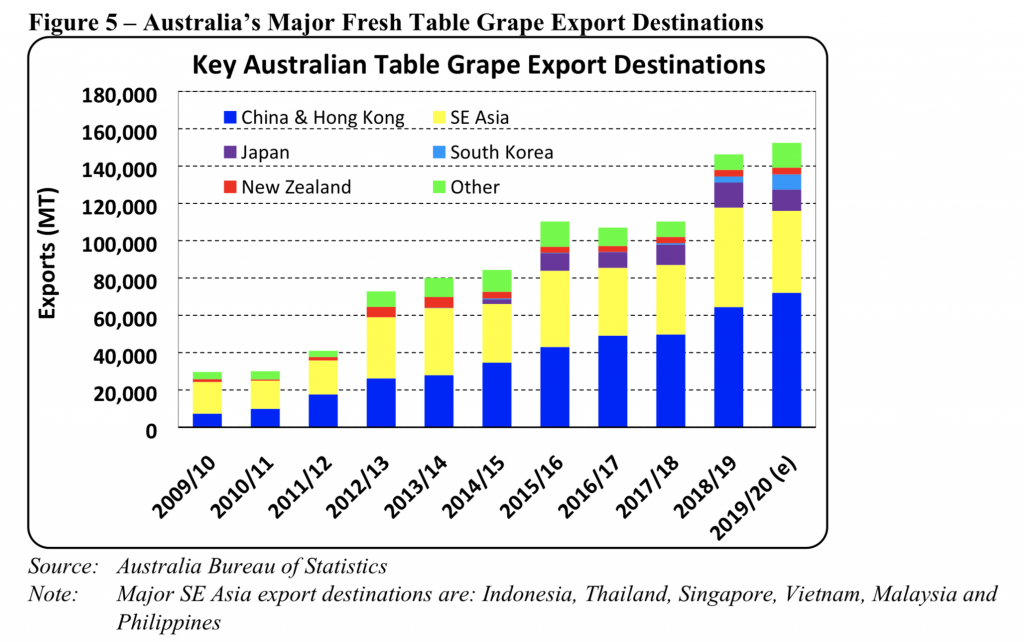 South Korea removed tariffs on Australian table grape imports in 2018. As a result, exports increased from very little in MY 2017/18 to 8,150 MT in MY 2019/20, accounting for around five percent of Australia’s total exports. This is at similar levels to the Philippines, Thailand and Vietnam.

Table grapes are a fresh product that keeps well in cold storage, enabling exports to be transported via refrigerated shipping containers rather than the higher cost of air freight. With improvements in shipping logistics and temperature monitoring of refrigerated cold storage shipments over the last ten years, the proportion of Australian exports shipped by sea has increased from 84 percent to 96 percent (see figure 6). The small volume of exports by air freight is predominantly for early-season grapes to premium markets. 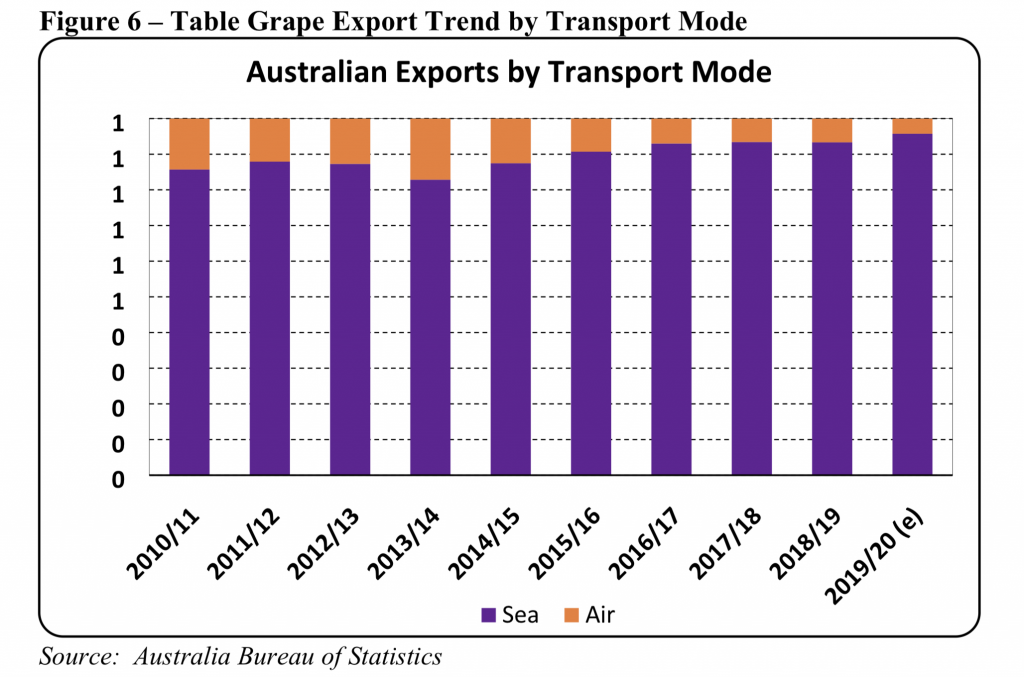 The significantly reduced international flights caused by border closures associated with COVID-19 are expected to have an impact on air freighted table grape shipments in MY 2020/21. The table grape export period coincides with increased demand for air freight from Australia as other summer fruits become ready for export markets. However, this is not expected to have a major overall impact, as merely four percent of grape exports were air freighted in the previous season. In addition, shipments may be supported by the federal government International Freight Assistance Mechanism (IFAM). The IFAM program is an air freight cost sharing arrangement between eligible agricultural product exporters and the government, and its goal is to provide a way for products to continue to be exported. The Australian government recently announced that this program will be available until mid-2021. Industry sources indicate that even with this support, air freight costs to exporters is still around double that of the pre-COVID-19 pandemic rates.

According to industry contacts, exports during MY 2019/20 were largely unaffected by the shipping disruptions caused by the COVID-19 outbreak, predominantly in February/March 2020 across China and other Asian countries. This period is when exports from Australia rapidly ramp up and peak. In general, export demand during this time remained high despite the uncertainty, allowing Australian exports to reach a record. However, some minor disruptions (for example a lack of refrigerated containers returning to Australian ports for shipping grapes) may have curtailed an even greater increase in exports.

Australia is the third largest supplier of table grapes to China after Chile and Peru. A key advantage for Australian exporters is that the shipping time to reach China is 18-20 days whereas it is around 35 days from south American countries. The shorter shipping time from Australia reduces transport costs and also improves product quality at its final destination. Industry sources indicate that the shipping advantage compared to major South American competitors, along with continued production growth predominantly focused around new seedless varieties, sets the industry to be very well placed to continue export growth the coming years.

Australia’s grape imports in MY 2020/21 are forecast to rise from the revised MY 2019/20 import estimate and match the level of MY 2018/19. The MY 2019/20 import estimate is revised down to 14,000 MT as a result of slower than expected shipment pace in the June to September period relative to previous years. Australia’s grape imports are almost entirely counter-seasonal shipments from the United States and occur between July and November (see figure 7). — By Zeljko Biki, USDA Foreign Agricultural Service 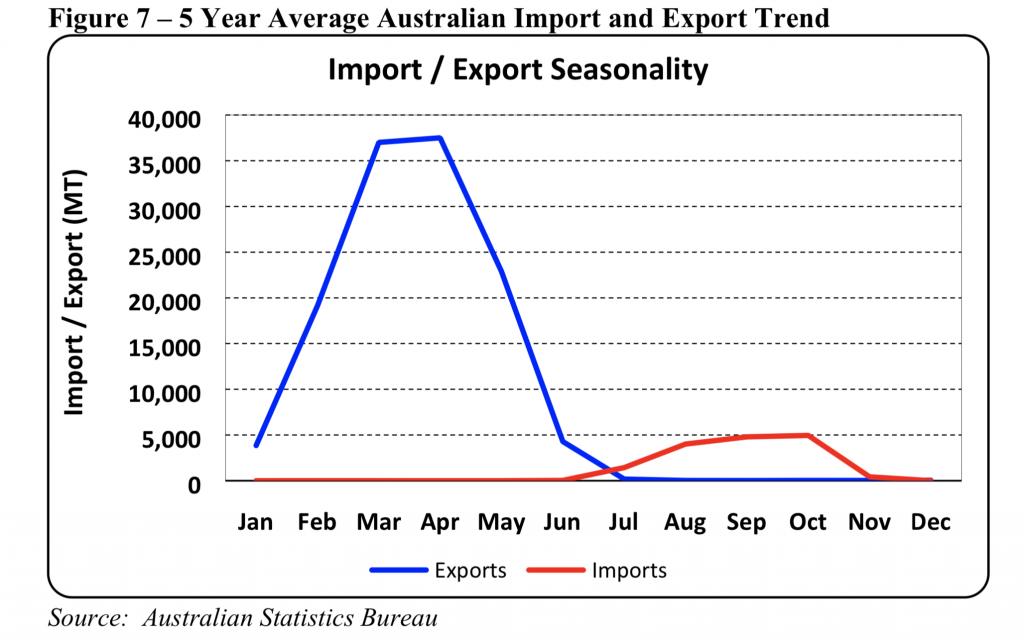